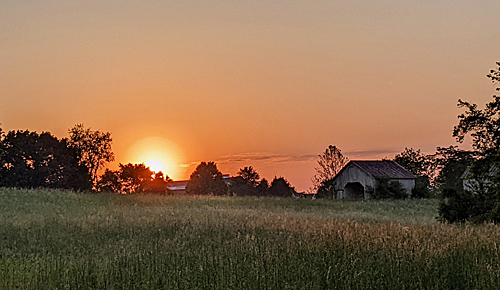 Our 10-hour Big Sit was held on probably the hottest day of the year so far.  Despite the high temperatures, the morning near the Gatehouse was actually pretty comfortable due to the shade of the mature trees nearby. We started off with an Eastern Meadowlark singing in the nearby fields, a Blackpoll Warbler singing, a Baltimore Oriole chattering, and a large flock of Cedar Waxwings flying by.  White-eyed Vireo, Orchard Oriole and Brown Thrasher were some of the highlights in the second hour. Common Yellowthroat, Indigo Bunting, Great Blue Heron and a pair of Great Crested Flycatchers rounded out the third hour.  As the day progressed, we found several other great birds including a Wild Turkey crossing the road, a late Blue-headed Vireo and a Northern Waterthrush in the creek.  All told, we found 63 species of birds during the day.  The full list of birds can be viewed on eBird at:  https://ebird.org/tripreport/58243