On Wednesday, April 13, at 6:00 pm at the Government Center Board Room (located at 1 Harrison St. SE, Leesburg, VA 20175), the Board of Supervisors are hosting a public hearing for comments on True North Data Center’s Zoning Concept Plan Amendment (ZCPA-2020-003) to increase the proposed building height from 35’ to 56’ while removing two building envelopes and increasing the amount of proffered open space from 64.25 acres to 71 acres. The building envelopes proposed to be removed include where the Northern Piedmont mafic barren is located. Even though construction has begun at the site, the mafic barren remains intact. This application will likely be the last opportunity to save this mafic barren from development. 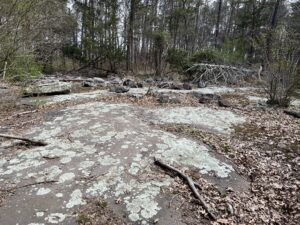 While Loudoun Wildlife stands by our original reasons for objecting to this project, this amendment is an opportunity to protect the mafic barren, a globally rare community, if it is approved. Mafic refers to rock that is rich in magnesium and iron. These outcrops include a combination of mosses, lichens, and crevices that holds soils that supports other vegetation and trees to create a unique collection of plant species. As a critically imperiled plant community, it has been designated as globally rare.

This application is an opportunity to protect this unique feature on the property. If this Zoning Concept Plan Amendment is not approved, the developer will be able to construct buildings (per the originally approved application) that would destroy the mafic barren.

What can you do?

Tell your supervisor that you support protecting the mafic barren.

Submit written comments to the Board of Supervisors.
Here are some tips to craft a compelling message to your supervisor:

Board of Supervisors – you can email the full board at bos@loudoun.gov.