Almost everyone can spot a majestic adult Bald Eagle with its white head and tail and large body as it soars on rising columns of warm air known as thermals.  It takes an approximate five-year progression of molts and physical changes to mature from a small, gray three-ounce hatchling to a three-foot adult with an approximate wingspan of six feet.

In the first weeks of life, Bald Eagles are often called hatchlings or eaglets.  They are initially covered in a light gray, almost white, natal down.  About two weeks later, this is replaced with a darker gray thermal down, and then finally with the first set of feathers, giving them an overall dark brown/gray/black appearance.  The beak is initially black and eyes are brown.  At about 12 weeks, when the eaglet takes its first flight from the nest, it is then sometimes called a fledgling.  Once the eaglet leaves the nest area for good, it begins life as a juvenile.  Because of the overall dark coloring, juvenile Bald Eagles are often mistaken for Golden Eagles. 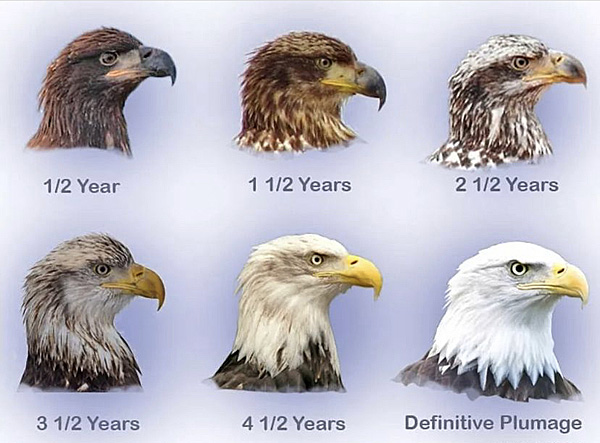 Beginning at about six months of age, the juvenile Bald Eagle turns a lighter brown with more white flecking.  After the first year, coloring changes are variable as the eagle goes through its first molt, which is a shedding and renewal of feathers.  The beak and cere (the membrane covering the base of the beak) also start turning lighter.

During years two and three, the Bald Eagle is referred to as immature.  At two and a half years, the most varied plumage occurs.  The breast remains dark brown, the legs are a brighter yellow, and the eyes and beak continue to lighten.

At three and a half years, the eagle may still be referred to as an immature or sub-adult.  It starts to show more features of the adult eagle, getting many white feathers in the head and the tail, though there is usually a dark patch by the eyes and a dark banding or terminal end on the tail.  The beak and eyes have lightened considerably, and some of the beak may now have the yellow coloring of the adult with darker areas as well.

At four to four and a half years, the eagle may look like an adult with a head of mostly white and some dark feathers.  The white tail begins to lose the terminal banding, and the beak should be almost totally yellow.  Interestingly, some eagles retain some dark coloring in their head throughout their life.

It is at this age that the sub-adult/adult eagle begins looking for a mate.  With a strong instinct to perpetuate the species, the pair will locate a territory and begin building a nest.