Eagles, like all mammals, are warm blooded.  They maintain an internal temperature of approximately 104 to 106 degrees Fahrenheit. 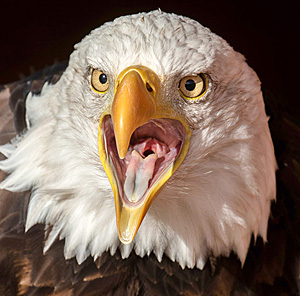 When an eaglet (also called a hatchling) is born, it has only natal down, which does not provide an ability to maintain temperature.  Therefore, until the thermal down comes in at about 10 to 14 days, the eaglet is dependent on the parents to provide warmth as well as protection from sun, rain or snow. The parents do this by brooding, covering the eaglet, and may even extend their wings out to make a larger area if needed.

It is important in this first two-week period that the parents keep the eaglet in the nest bowl under them.  There have been instances where the eaglet moved outside the nest bowl, was not brooded, and died as a result.  Parents usually herd the eaglet back into the nest bowl, but not always (usually when there is more than one eaglet to keep track of).

When the eaglet begins to grow in its coat of thermal down, it is better protected.  However, you will still see the parent attempt to brood or cover it in inclement weather, such as rain. This is often referred to as a “mombrella” or “dadbrella.” We have even seen instances of both parents attempting to cover the eaglets in inclement weather. 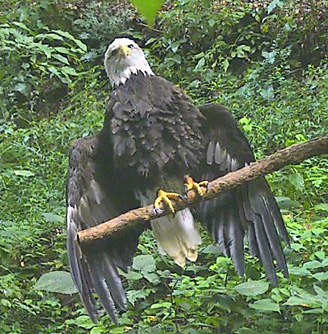 Eagles and eaglets often handle higher temperatures just like a dog, by panting (an open mouth with increased respiration). There is a hole in the tongue that is connected to the respiratory system (see photo above).

You also often see eagles or eaglets doing what is called a “batman pose.”  They spread their wings out from their body, which allows the main part of their body to be cooled by the air around them.  This is called “sunning.” This posture can also be seen when feathers are wet and need to be dried.

When it’s hot,  it is not unusual to see the parents stay off their young to facilitate temperature regulation.