Why Did One of the Bald Eagles’ Eggs Not Hatch?

With so many web cams now available on eagle nests, it is often seen that either an entire clutch doesn’t hatch, or one or more eggs of a clutch don’t hatch, yet there is a healthy hatchling.  This is also observed by those who monitor eagle nests in Florida for the Audubon Society. 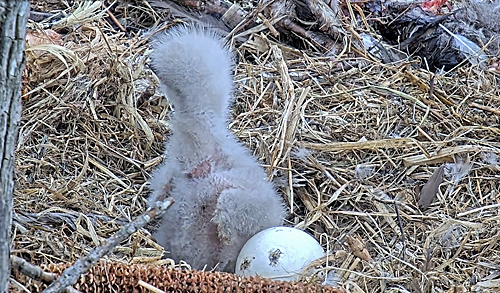 At the Dulles Greenway Eagle Cam, we have one healthy Bald Eagle hatchling (DG1) that arrived on March 13, 2022.  There remains one egg in the nest that is now at the 40 day mark, and many hours post pip noticed on March 15 at 9:10:55 with little progress and no current movement seen.  We will likely see Rosa and Martin continue to tend to the egg as well as DG1 for some time.  The egg may eventually get buried in the nest or may disintegrate.

The second reason why an egg won’t hatch has to do with some factor that happened after fertilization halting the process of embryo development.  It could be an external factor such as improper temperature, improper humidity, or lack of rolling the egg (which helps keep the embryo from sticking to the shell).  Somewhere in the process the egg may have developed a crack that allowed bacteria to enter the egg, or it may have been accidentally damaged.  Eggs have been witnessed on web cams to be stepped on and broken open during the incubation period.

In this case, it appears something occurred during the hatching process.  It could be due to a weak hatchling unable to complete the process, or some physical issue occurring during the hatch to the shell or the hatchling. Partial hatches with full hatch failure have been observed in the wild with web cams, and in those eagles under human care.

At  the American Eagle Foundation, where there are many human-cared-for pairs of bonded eagles, some of the older pairs continue to lay eggs, but the eggs fail to hatch.  So, age may be a factor in fertility of eggs as well.  (These eagles are in human care due to injuries that make living in the wild impossible, so they were permitted by US Fish and Wildlife to be kept by the foundation.) It has also been observed through the eagle cams that sometimes the first clutches of new pair bonds may not be successful (which may be due to the young age of the eagles or the timing factor of mating while developing that bond).

While it is disappointing not to have the second egg hatch, we are fortunate to have one very healthy eaglet in DG1 that Rosa and Martin will raise. We are confident that the eaglet was the first egg hatched with a pip on day 39, and a hatch on day 40.   DG2, the second egg did pip on day 39 as well but did not progress to hatch as expected.  Eagles usually lay two to three eggs for this very reason, making sure there is at least one healthy eaglet that survives. We have an exciting season of eagle development to look forward to.

Learn more about egg hatching with this post from the Raptor Resource Project.