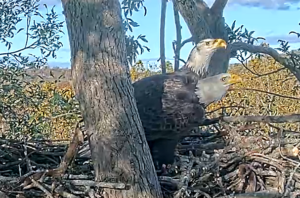 On November 4 the Dulles Greenway announced that its pair of resident Bald Eagles have returned to the Dulles Greenway Wetlands to begin building their nest for the season. The Bald Eagles typically arrive to their nest between the hours of 7:00 am – 8:00 am and 5:30 pm – 6:30 pm. Once the eagles have properly prepared their nest, they will move onto the next stage in the nesting process, which is to begin laying eggs and incubating them. According to the U.S. Fish and Wildlife Service, the Bald Eagles are scheduled to start laying their eggs in January.

According to the National Eagle Center, Bald Eagles have nest site fidelity and will use a productive nest year after year, adding one to two feet of new material each year. Starting in the middle of October, both the male and the female eagles began adding to the nest together. The pair uses interwoven sticks to add to the nest structure and arrange them within the nest. The interior is usually lined with grass, corn stalks, and other material. The bowl is usually filled with soft materials including moss, which may serve as an insect repellent, and the downy feathers from adults.

“It has been very exciting watching the Bald Eagles build their impressive nest to prepare for the egg laying and incubation period,” said Terry Hoffman. “We look forward to welcoming eaglets in Spring 2022 and we are thrilled to share this experience with our local community. We encourage viewers to join the live-stream and speak with our eagle camera volunteers via the chat function on our website.”