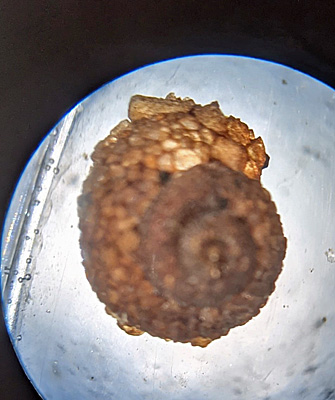 On September 27, certified monitor Jennifer Venable led a team in a stream survey at a newly-established site along Limestone Branch at Temple Hall Farm Regional Park between Leesburg and Lucketts. Temple Hall is part of the Northern Virginia Regional Park Authority and the land there has been placed under conservation easement. Stream Team monitors Emma Lloyd and Amy Ulland, and Loudoun Soil and Water Conservation District’s Pat McIlvaine, assisted with the benthic macroinvertebrate survey. The majority of macros collected included mayflies, caddisflies (including the amazing snail-case caddisfly pictured), and beetles. The stream received a score of 11 out of 12, indicating very acceptable ecological conditions.

On September 28, certified monitors John Ellis, Amy Ulland, and Emma Lloyd conducted a stream survey at a site on the Sweet Run tributary at the Blue Ridge Center for Environmental Stewardship (BRCES) in Neersville. BRCES is natural area that will become a state park in the near future. The Robert & Dee Leggett Foundation purchased the land in 1999, which has been managed by BRCES for the past 20 years. Conservation easements were placed on the land in the early 2000s that will protect the land and it’s natural features, including the streams that flow through it, in perpetuity. A wide range of macros were found, including hellgrammites, beetles, caddisflies, mayflies, and a few stoneflies (pictured). The stream received a score of 11 out of 12, indicating very acceptable ecological conditions. 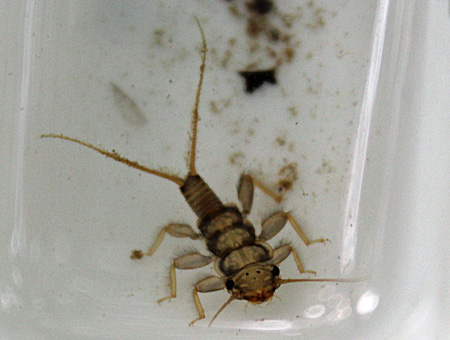