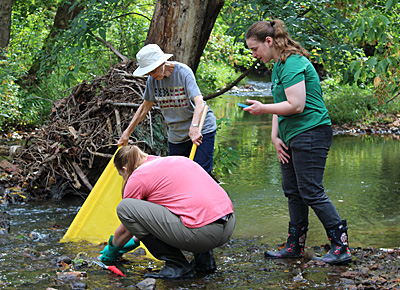 Volunteers assisted with netting and identification of the macros from several riffles at the site. After performing the maximum of four nettings allowed under Virginia Save Our Streams protocol, the team collected 208 macros, just over the 200 minimum amount needed. Of this total, almost half of these were caddisflies (both regular and common netspinning varieties), while the other half were flatworms. A handful of beetles, a black fly, and a few midges and aquatic worms were also present.

High schooler Liam McCormick assisted with the mathematical calculations needed to arrive at our multimetric index score for the stream. After working through the metrics for organism groups, pollution tolerant groups, and non-insect groups, he finally determined that the stream’s score was 9 out of 12. This means that, although not a highly productive stream, this segment of the Tuscarora currently has acceptable ecological conditions.

In addition to the biological survey conducted at the site, the team also conducted sodium chloride testing using test strips provided by the Izaak Walton League of America’s Salt Watch Program. Sodium chloride comes from runoff from road salt applied to roads in the winter and is toxic to freshwater creatures. The test revealed that the water contained 42 ppm of sodium chloride, which is below EPA chronic toxicity limit of 220 ppm. We are establishing monthly baseline data for this site, so we can be on the lookout for significant increases or decreases given it’s proximity to Routes 15 and 7. 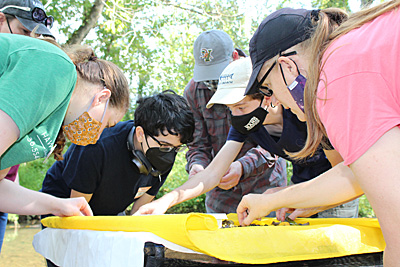 The group noted that many people visit the site, from families fishing to folks bringing their dogs swimming. Quite a bit of trash was found (and removed from) in and around the stream, including a plastic mulch bag, packaging, styrofoam, and dog waste. The group also observed numerous dead crayfish, which may have resulted from heavy rains from earlier in the month. Amy Ulland also documented the presence of some blue-green algae at the site, which she reported to the Virginia Department of Health for further investigation.