Stream Monitors Are Certified as Trainers 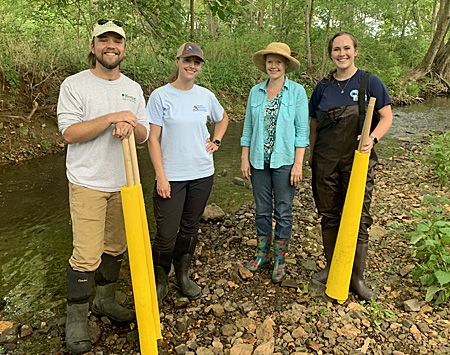 An American Kestrel and a Belted Kingfisher greeted the small band of Virginia Save Our Streams (VA SOS) Train the Trainers as they arrived at their training site along the Tuscarora Creek in Leesburg on September 16. Samantha Briggs, Izaak Walton League of America’s Clean Water Coordinator, and Kira Carney, Save Our Streams Coordinator for the Mid-Atlantic, led the day-long field session that resulted in the certification of current stream monitors as trainers, allowing them to train others to become certified as stream monitors. Amy Ulland, Loudoun Wildlife’s Stream Monitoring Program Coordinator, was one of three people to receive trainer certification – which is a good thing, as she will be training seven new monitors this fall!

Part of the field session involved conducting a biological survey of the stream, discussing technical aspects of the VA SOS protocol along the way. This site, just downstream of where Dry Mill Branch becomes Tuscarora, received an indeterminate rating – meaning that the diversity and number of benthic macroinvertebrates collected couldn’t definitively indicate acceptable or unacceptable ecological conditions. Out of the 204 macros collected from the stream, nearly half of the sample consisted of beetles, which are intolerant to pollution. However, the other half of the sample consisted of flatworms, which are highly tolerant of pollution and often indicate pollution from organic matter or nutrients.