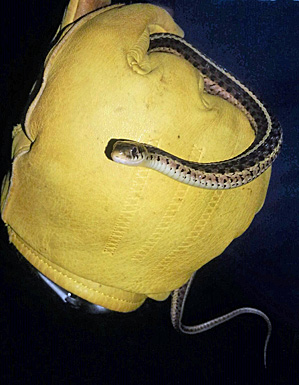 The July 24 night walk led by Jenny Erickson at the JK Black Oak Wildlife Sanctuary brought out six participants to learn about and search for amphibians and reptiles.  The temperature was fairly pleasant but very dry.  Due to the heat and the lack of rain for the past few weeks, all the vernal pools have dried up.  The only place that still had water was the LeSabre pond, which only had around a quarter of the normal water capacity.  Despite the dryness, the group did locate several species of amphibians including a healthy population of green frogs in and around the LeSabre pond.  We also spotted a couple of green frogs away from the water as well.  The group found two juvenile pickerel frogs, which was a first for this year’s herpetology counts at the JK Black Oak property.  We also found a juvenile garter snake near the LeSabre pond as well.  We were also fortunate to have been serenaded by an Eastern Screech Owl after dark in the wooded area.  It was a productive night for locating some of the Herps (reptiles and amphibians) who inhabit the JK Black Oak property.