On a beautiful, warm and sunny Thursday morning, seven birders, including trip leader Bruce Hill, visited three locations in south Ashburn.  At our first stop, the trails near the National Parks and Recreation Association produced good looks at Acadian and Great-crested Flycatchers, Double-crested Cormorants on the lake, and flyovers by an Osprey, two Red-shouldered Hawks and several noisy Purple Martins.  A total of 51 species were seen or heard there. 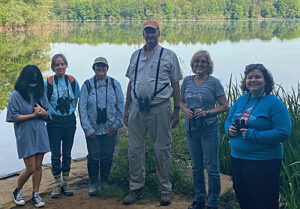 After a short drive east, we circled the trail and boardwalk at the Broadlands Wetlands Nature Preserve.  While shorebirds were largely absent, we were entertained by a breeding-plumaged Green Heron, a male Yellow Warbler, singing Prairie Warblers and one adult Killdeer with two gangly chicks (35 species in total).

Finally, the die-hards among us pressed on into Brambleton and the Broad Run Stream Valley Park for a brief overlook of the wonderful wetland and field/edge habitat there.  We were treated to excellent views of a female Hooded Merganser and her seven chicks, along with Spotted Sandpiper, Orchard Oriole, Grasshopper Sparrow, a singing Blue Grosbeak and multiple Indigo Buntings (and 29 total species).  We finally called it quits as temperatures rose into the mid-80s, after a memorable morning with a diverse bird list to show for it.