The May 22 bird walk at the Blue Ridge Center for Environmental Stewardship concluded Loudoun Wildlife Conservancy’s Celebrate Birds! walks this spring. Twelve participants joined our four leaders for a warm, sunny morning. We split into two groups and headed in opposite directions along Farmstead Loop.

For the team led by Michael Sciortino and Mary Ann Good, the walk was great fun, the company was top-notch and the birds showed up!  It was fun having so many on the walk who were avid to see and hear and learn.  The most exciting bird for many was the Prothonotary Warbler at the pond, and entering one of the nestboxes—we got knockout views.  A Northern Waterthrush sang nearby, a favored stopover spot on his way north.  We also heard first a Northern Parula do its alternate song that someone’s BirdNet app kept telling him was a Cerulean—then we clearly heard two or three Ceruleans that clinched the difference.  A Kentucky Warbler and several American Redstarts were also heard then seen, with killer looks at the very cooperative Kentucky.  We got satisfying looks at two pairs of Louisiana Waterthrushes, hearing its song.  Singing Ovenbirds and Common Yellowthroats rounded out the warbler list.  A couple of Yellow-breasted Chats (ex-“warbler”) chatted invisibly at two locations.  A Scarlet Tanager showed its glowing color in the sun, we watched an active Acadian Flycatcher who made his twittering flight song with each short foray, and we heard two Yellow-throated Vireos saying “three-up, three-ay”, with the Red-eyed Vireos’ more conversational accompaniment.

The team lead by Anne Ellis and Michael Myers enjoyed seeing and hearing many of the same birds, including great looks at the Prothonotary Warbler, and the teams crossed paths while viewing the Kentucky Warbler. While we didn’t hear the Northern Parula or Yellow-throated Vireos, we did hear a Broad-winged Hawk vocalizing in the woods. Though we didn’t see a Scarlet Tanager, we did get a glimpse of a Woodcock as it exploded, out of nowhere, to hastily take flight in the opposite direction of our group. Overall, it was a delightful morning for a bird walk, and everyone enjoyed seeing and hearing many species.

The complete list of species for each group is shown below. 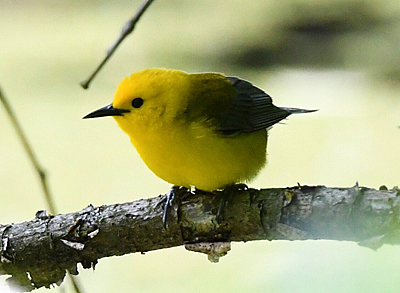 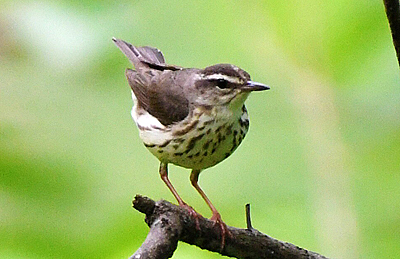