Birding Off the Beaten Path: A Walk Through Olde Izaak Walton Park

Editor’s note: This second article in Habitat Herald’s ongoing “Off the Beaten Path” series takes us again to Leesburg’s Olde Izaak Walton Park. Read on for a tour of some of this hidden gem’s best — and best-hidden — birding spots! Click here for the first article. 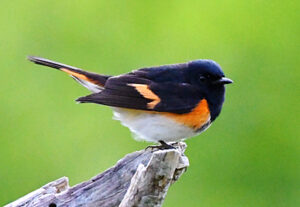 Olde Izaak Walton Park is located just south of downtown Leesburg on Davis Court SE off of King Street. It is bounded on one edge by Tuscarora Creek, and on another by the Route 7 bypass. A short walk from downtown, this small park is known more for its dog park than its natural features, but it still provides an opportunity to see an abundance of birds. I’m going to take you on a walking tour of the park, and point out where I have located birds along the way. I hope my experiences will enhance your chances of seeing some of these species if you visit the park.

Once over the bridge, there is a small wooded area with a utility road on the right, across from the entrance to the park on the left. This wooded area is always worth a look, as there is often a mixed flock present. I spotted a Veery here, and it was in this same area that I spotted an extremely late season (late November) Black-and-White Warbler.

Heading into the park, there is a thickly wooded area with lots of brambles on the right. It’s much easier to glimpse birds in this densely shrubbed area in the winter. I heard a Wood Thrush singing in here multiple times, echoing off the stone outcropping in this spot. Sometimes I will walk along the entrance road on this side, but often I’ll walk along Tuscarora Creek.

There is an Osage Orange tree with quite a few tangles right at the beginning of the park, and I’ve spotted a Cape May Warbler and Rose-breasted Grosbeak tucked into its branches. In addition to sandpipers, during the summer numerous birds can be found along the creekbanks. In one of the tall Sycamore trees overhanging the creek, Eastern Kingbirds were nesting. Most of the abundant and common species found in Loudoun, including Bluebirds and Yellow-rumped Warblers, can be found throughout the park. 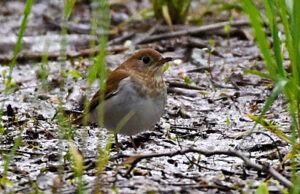 This Veery was hanging out in a small wooded area across from the park’s entrance.
Photo by Michael Myers

In the early winter, I occasionally spied an American Kestrel perched atop one of the Sycamores, keeping an eye out for its next meal in the adjacent field. Along the creek are many snags, and woodpeckers and flickers can be found banging away and making use of the cavities. I was fortunate to witness two flickers performing a courtship dance; it was quite the sight, with tail flashing, bobbing, and weaving. Working my way down the creek toward the main parking lot in November, I spotted my first Winter Wren low in the creekside shrubs. Great Blue Herons can often be spotted along the creek.

The road to the main parking lot splits in two as it goes up a slight hill. Taking the right fork, there is a cutout midway up the hill that overlooks an open area of a former quarry, with a glimpse into the brambled wooded area. I don’t always stop at this spot, since it often has high grass in the summer, but it can be a good vantage point, and I’ve spotted Brown Creepers there in the winter.

Across the parking lot, there is another utility road that passes through a small wooded area and connects to a power line utility cut which provides access to the far end of the pond. This wooded area has all the usual suspects, including whole families of Carolina Wrens, but I’ve also spotted a pair of Fox Sparrows at the edge of the woods along the power line cut. The cut typically gets mowed just once or twice a year, so sometimes I avoid it in the summer to reduce my chances of getting ticks.

Despite the highway traffic noises, the edge habitat along the forest can be productive. I’ve spotted a Blue Grosbeak, Indigo Bunting, and Tennessee Warbler in this area. The far end of the pond gives a good vantage point of the more secluded portion of the pond, and Green Herons tend to hang out in the shallows along the bank. I’ve also spotted a Broad-winged Hawk perched on a fallen tree overhanging the water. This end of the pond is also a great place to see dragonflies and butterflies. There is quite a diversity of flowers, including Swamp Milkweed, Jewelweed (where I witnessed a Ruby-throated Hummingbird feeding), and other wildflowers. 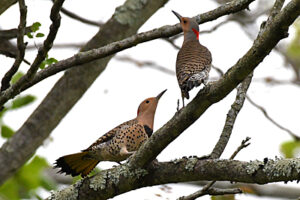 A male and female Northern Flicker engage in a courtship dance in one of the park’s creekside trees.
Photo by Michael Myers

Heading back to the main parking lot, I work the edge of the wooded area toward an opening to the pond’s shoreline. There are quite a few cutouts for anglers to access the pond. I saw a great mixed flock of warblers next to the pond in the fall, including Cape May, Bay-breasted, Blackburnian, Chestnut-sided, and Black-throated Green warblers all in the same tree. Many days there will be at least one mixed flock of birds, and sometimes two.

There are multiple points to view the pond, though I seldom see much on its surface. Swallows, kingfishers, mallards, and geese frequent the pond throughout the year, and I did witness a Wood Duck rearing her young family of ducklings this past summer. There are a few Wood Duck boxes set up here.

Working around the edge of the pond, there is a gravel road (restricted to foot access) between Tuscarora Creek and the pond. At the beginning of this road, I spotted a Brown Thrasher skulking in the brush on multiple occasions. Orchard and Baltimore Orioles have greeted me at the entrance to this road as well. While there are spots to look upon the pond, there are also places that offer a view into the brambles and tangles along the creek. These tangles are where I tend to see the mixed flocks of warblers. This is also an area where there is a more significant riparian buffer. Some notable finds include a Philadelphia Vireo, Black-throated Blue Warbler, Northern Parula, Blackpoll Warbler, and Chestnut-sided Warbler (that decided to perch right above the trail for an extended look).

At the far end of the road is the outflow for the pond going into Tuscarora Creek, and a sign on a bridge here points out that this is the edge of the park boundary (though there is a social trail that extends beyond it). At this edge of the pond, right before the outflow, I’ve spotted a Northern Waterthrush each of the past two years in the same spot. 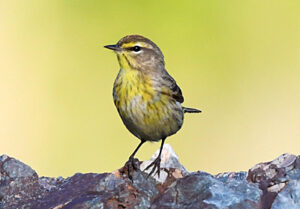 A Palm Warbler perches in the park.
Photo by Michael Myers

Working back down the gravel road, it aligns with the paved exit road to the park. This paved road descends the hill and connects the loop with the entrance road. It’s always good to keep an eye and ear out for any new birds on the way out. And don’t forget to look up: I witnessed a sizable kettle of Broad-winged Hawks during migration. I’ve also seen flyovers of Bald Eagles, Cooper’s Hawks, Ravens, Common Nighthawks, and Chimney Swifts.

I hope that you’ve enjoyed this walking tour of Olde Izaak Walton Park. This park is a good reminder to get out and enjoy even the smallest green spaces off the beaten path because you never know what you may find. Happy birding!