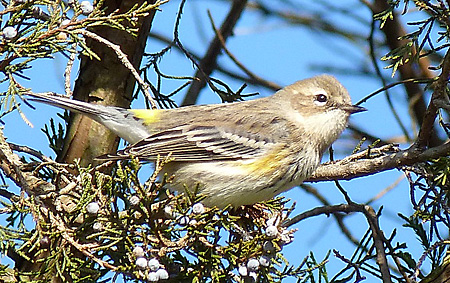 A small group of birders joined leaders Allison Gallo and Bryan Henson for a pleasant visit to Bles Park on a clear, sunny morning on Sunday, April 18.  The little marshy area next to the parking lot provided views of a Brown Thrasher and Swamp Sparrows in addition to the ubiquitous Red-winged Blackbirds.  As we rounded the path to the main marsh, we were treated to a nice selection of flying insectivores including Tree Swallows, Barn Swallows, Northern Rough-winged Swallows and Chimney Swifts.  In the marsh, we spotted two pairs of Blue-winged Teals, a single American Coot, a sneaky Pied-billed Grebe and a couple animated Green Herons.  Warbler sightings were light with Yellow-rumped Warblers and a Prairie Warbler that was heard but not seen providing the only species.  An aerial show by three Red-shouldered Hawks provided some excitement.   All total, we found 45 species of birds.  The complete list can be viewed online on eBird.