Tree Swallows are Harbinger of Spring at Bles Park 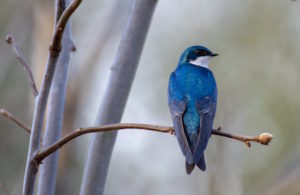 Six birders  joined leaders Allison Gallo and Bryan Henson at Bles Park in eastern Loudoun County on a cold but sunny morning on Sunday, March 21.  Spring was in the air, and birds were singing while we were in the parking lot providing good views of Northern Mockingbirds, Brown Cowbirds and Red-winged Blackbirds.  Shortly down the path, we found a bevy of wintering White-throated Sparrows chipping and singing.  As the marsh came into view, we saw several species of waterfowl, including lovely Wood Ducks, Ring-necked Ducks and a Northern Shoveler.

Along with the ducks, we found another harbinger of spring — Tree Swallows were flying over the marsh and also sitting on one of the bird houses mounted in the marsh.  A Wilson’s Snipe flushed from the mud flats giving us only a brief look at its lengthy bill.  Over the course of the walk, we spotted several more of our wintering bird species: Yellow-rumped Warblers, Golden-crowned Kinglet and the cryptic Brown Creeper.  We’ll have no more than a couple of months to appreciate these species before they leave for their breeding grounds.

The complete list of bird seen can be viewed at: https://ebird.org/checklist/S83797602