Seven tricked-out birders (binoculars, scopes and cameras in hand) joined leaders Michael Myers, Mary Ann Good and Bruce Hill on a beautiful, crisp Monday morning walk at the Dulles Wetlands on March 22.  After a night in the 20’s, blue skies and bright sun were warming things up as we passed through the gate just after 8:00am, and the birds seemed as happy about it as we were.  Tree Swallows soared over the cattails shortly after our arrival, a few already staking out nest boxes in competition with Eastern Bluebirds.  Song, Field, White-throated and Swamp sparrows sang or called from multiple directions.  Ravens appeared (re-appeared?) throughout the morning.  And the resident Bald Eagle pair was back for another try this year, one on the nest, another standing guard nearby, while last year’s youngster made a cameo. Though no non-avian species were seen, signs of recent beaver, otter and coyote activity were evident.  Spring peepers were quiet early on; by the end of our walk at 10:30am they were in full voice. 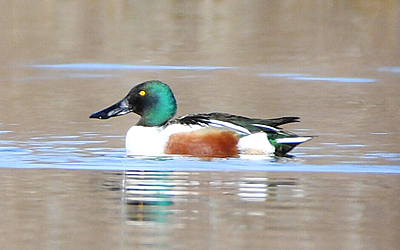 But ducks were arguably the stars of the show.  Though not in large numbers, the variety of species was impressive.  Eight species of duck, a few coots and grebes, and a handful of Canada Geese were tallied, with perhaps more staying out of sight in the many water channels beyond our view.  Colorful Northern Shovelers in particular provided great looks, on the water and in flight.  Wood Ducks, Green-winged Teal, and Ring-necked Ducks added to the palate.  Water levels in the wetlands were moderate, a function of several dry weeks tempered by our one period of rain several days ago.  The improved trail, and only limited mud, made the trek even more enjoyable.  All-in-all, time well spent.  Stay tuned, LWC hopes to hold more Dulles Wetland walks in the future.

A full list of the birds seen is provided below: 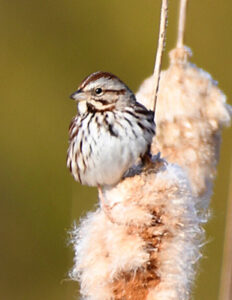