Weeds and Weediness: A Look at the Origins of the Plants We Love to Hate

What is a weed? Many of us may have heard that Ralph Waldo Emerson defined a weed as “a plant whose virtues have not yet been discovered.” However, there are any number of definitions of weeds and weediness. Some definitions depend upon how humans feel about weeds. A “plant in the wrong place” is one, but other definitions have more to do with how the plant functions in the landscape: “pioneers of secondary succession” – that is, plants that grow back after disturbance due to fire or other clearing of the vegetation.

Some of the properties of weedy plants that allow them to colonize disturbed landscapes include having many small seeds and/or tough taproots and being able to germinate quickly when exposed to sunlight. Many of them spread clonally as well. Many weed seeds can remain viable for decades in the soil seed bank. That’s why we get weeds whenever we turn over the soil! Some thrive in freshly tilled soil, while others are adapted to the compacted soil that humans create by their activities.

I particularly like the definitions that describe weeds as plants which thrive in landscapes disturbed by humans. It is said that Mother Nature abhors a vacuum. Weeds are opportunists that will fill an ecological niche left open by disturbance. Anytime we cut or burn existing vegetation, create paths, roads, or railways, abandon a field, or turn the soil, we are creating “disturbed” landscapes. For this reason, some definitions of a weed focus especially on weeds as plants that “follow” humans around. We may not want them around, but it is our activity that creates habitats in which they flourish. Botanist Edgar Anderson in his book Plants, Man, and Life called weeds “artifacts” — that is, things that would not exist if humans hadn’t produced them. In Anderson’s words, “though man did not wittingly produce all of them, some are as much dependent upon him, as much a result of his cultures, as a temple or vase or an automobile.” Anderson said that “the history of weeds is the history of man.”

Weeds have been around for a long, long time. Archaeologists have found what they call “proto-weeds” from a hunter-gatherer settlement in Israel dated to 23,000 years ago. With the evolution of agriculture, around 10,000 years ago, weeds really took off. In fact, the presence of certain weed species indicates to archaeologists that agriculture was occurring at a site. At this time humans began disturbing ever larger portions of the landscape by fire and other means. The acts of clearing, cultivation, and collection of crop seeds favored not only the crops but the weeds. If you think about organisms in terms of their strategies for survival and reproduction, being a weed that is unconsciously gathered and spread by humans is a good one, given how many human beings there are. No wonder we gardeners can’t get rid of them!

In many cases, a crop and its weed relative evolved from the same progenitor wild plant, and there are many crops with a closely related weed species or variety that remain with us today. In many cases, these relatives, which continue to evolve in the wild, hold precious genetic diversity needed by breeders, since crop plants hold very little genetic diversity. There is a need to conserve these “crop wild relatives” worldwide. Like crops, these weeds are dependent upon the disturbed areas humans create for their continued existence.

It’s helpful to think of weeds and weediness as being on a spectrum — from those plants with the “weediest” habits, which prefer disturbed sites, to those on the other end of the spectrum, which do best in more “closed” habitat — such as a forest with long-lived tree species and little opportunity for sunlight to reach the ground.

There is also a spectrum of what we humans consider weeds and are willing to tolerate or even value in our landscapes. These landscape preferences are changing, largely because of the efforts of organizations such as Loudoun Wildlife and Audubon at Home, which encourage homeowners to value plants such as common milkweed because of the wildlife value they offer. Weeds perform many ecosystem services in the landscape. For example, when weedy pioneer species move into a newly disturbed landscape, they hold the soil in place, preventing further erosion.

Nature makes disturbed habitats, as well. Weedy pioneer species thrive on riverbanks, steep cliffs, and where trees fall in a windstorm, leaving an open, sunny site. It’s been suggested that many of the weeds we know today descended from plants that colonized the areas where Pleistocene glaciers advanced and retreated, leaving bare, unvegetated ground. It is said that most of our gardening and farming is “holding back natural plant succession.” Thomas Rainer and Claudia West point out, “All gardening is an attempt to halt ecological succession and freeze it at a point that pleases us aesthetically,” and agriculture specialist Preston Sullivan says “weeds are evidence of nature struggling to bring about ecological succession.” Creating lawns favors weeds for the same reasons. If we stop mowing the lawn, what comes up are pioneer species, as the lawn moves along through the process of succession.

The plants pictured throughout this article are just a few from the weedier end of the spectrum — from those that are a nuisance to those we accept for their ecosystem services, such as providing habitat for wildlife or because they are edible. These plants are all listed as “weeds” in Virginia Tech’s Weed Identification website. 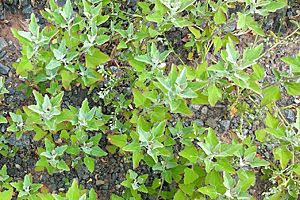 Chenopodium. Speaking of weeds that are related to crops, the Chenopodium genus has an interesting story. The chenopod that we may be familiar with is Chenopodium album, called goosefoot or lamb’s quarters. It thrives in human-made disturbed areas like the edges of parking lots. Chenopodium seeds are the dominant weed seed in the soil seed bank on many farms. When I see goosefoot or amaranths appearing in my lawn or garden, it makes me reflect on the agricultural history of the land. A close relative, Chenopodium berlandieri, formed a part of a suite of plants, now mostly evolved back into weedy and wild plants, that were domesticated by American Indians. A huge cache of seeds of C. berlandieri, thousands of years old, was found in a rock shelter in Ohio, and the seeds show evidence of domestication (domesticated plants are those that have been changed by their interaction with humans to the point where they are dependent upon human care and are genetically different from their wild progenitors). Only two of the crops from this complex survived — sunflowers and a species of squash. An anthropologist at Ohio University, Paul Patton, has been breeding chenopods to try to reestablish this “lost crop” and have farmers adopt it. It is also related to quinoa (Chenopodium quinoa). 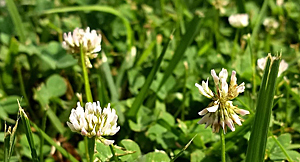 Clover (Trifolium repens) was not considered a weed in lawn grasses until about 60 years ago, and in fact used to be part of the mix of seeds sold for establishing lawns! Clovers serve a great purpose in lawns, as they have a symbiotic relationship with bacteria that fix nitrogen in the soil. When chemical companies developed weed killers that could eliminate most of the plants in the lawn while sparing the grasses, they convinced the public that we didn’t want clover in the lawn. 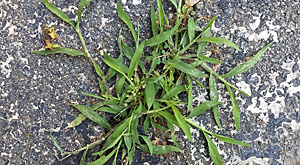 Crabgrass (Digitaria sanguinalis), which many homeowners consider a serious weed in their lawns, was actually cultivated in central Europe as a cereal until the 1800s. Crabgrass is one of many grasses brought to the Americas by Europeans for foraging for livestock. It is thought that it did not become a “problem” in the lawn until the 1930s. Crabgrass is host to the Fiery Skipper butterfly. 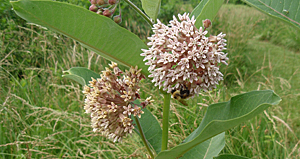 Common Milkweed (Asclepias syriaca) is the host plant for the Monarch caterpillar, and Loudoun Wildlife Conservancy has been part of the nationwide effort to encourage planting of milkweed. Many other plants that we are now putting in our gardens are on this weedy end of the spectrum, but that’s not a bad thing. The mountain mints (Pycnanthemum spp.) are also aggressive natives that many of us enjoy having in the garden because of the number of bees that forage on it and because it can crowd out less desired plants. 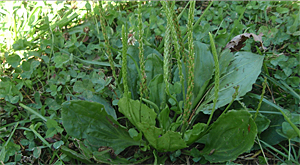 Plantain (Plantago mayor) is from Europe. It probably arrived in the Americas in the early 1600s as weed seeds mixed with crop seeds. American Indians referred to it as white man’s footprint, as it followed Europeans everywhere they went. It is a sign of wet or compacted soil. 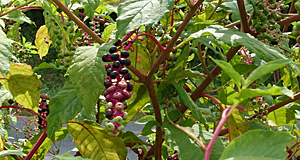 Pokeweed (Phytolacca americana) is a native that will probably come up in your yard if you stop mowing. It’s quite weedy, and it’s a hard decision whether to let it spread or not because it’s pretty and the fruits feed 30 different bird species. Some people eat the young leaves, but the whole plant is considered to be toxic. 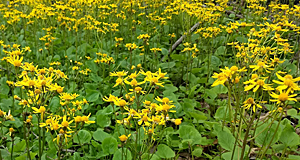 Golden Ragwort (Packera aurea) is one of those weedy, aggressive native wildflowers that many of us are using to outcompete invasive plants. Nancy Lawson calls this fighting “plants with plants.” Golden Ragwort blooms early, adds color to the garden, and is an attractive groundcover later in the season. For more ideas see Nancy Lawson’s article listed in the Resources below. 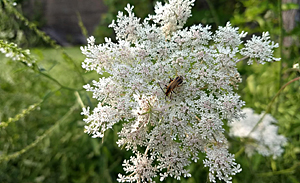 Queen Anne’s Lace (Daucus carota subsp. carota) smells a bit like carrots. It is a crop wild relative to the domesticated carrot (Daucus carota subsp. sativus), which is a different subspecies within the same species. It’s thought that the domesticated carrot evolved from something that looked like Queen Anne’s Lace. A non-native, it is considered noxious in some states.