A Wildlife Haven in a Townhome Yard

Janet Hensley inherited her passion for gardening from her mother, who loves wildflowers like Dutchman’s Breeches, Trout Lilies, Bloodroot, and Trilliums as much as the more classical gardeners’ fare of Hosta and Peonies. Janet became a conservation advocate when in fifth grade she was required to learn the definition — “Conservation is the wise use of our natural resources so as to give the greatest benefit to the largest number of people for the longest period of time.” She would spend time sitting on a snag by a stream close to her home, absorbing nature and enjoying the tranquility.

Janet’s townhouse yard offered her little in the way of nature or tranquility resources when she moved there four years ago. In the back, there was scrubby grass covered in dandelions, with three cinder-block raised beds for vegetables, and a Weeping Willow tree that had entirely outgrown the small space. At the side of the house was a huge Leyland Cypress, with non-native hollies and a Japanese Maple. She also had a very active homeowners’ association with rather narrow views on how the neighborhood should look.

Her first changes included removing the Weeping Willow and replacing the Cypress with a native multi-trunk River Birch. She also removed the raised beds, dug out the dandelions and decide to keep a narrow curving area of lawn with flower beds on either side. She added stepping stones to the beds to enable her to walk among the flowers. Given the limited size of the yard, she selected a number of native plants and native cultivars that remain small, with limited height and spread. For example, while Threadleaf Coreopsis (Coreopsis verticillatea) and Wild Petunia (Ruellia caroliniensis) are naturally limited in height, Janet selected Iron Butterfly (Vernonia lettermanii) rather than the much taller New York Ironweed (Vernonia noveboracensis) and Dwarf Joe Pye Weed (Eupatorium dubium) instead of regular Joe Pye Weed (Eutrochium fistulosum) which can reach eight feet in height! She also chose to put in a dwarf Redbud cultivar (Cercis canadensis) to avoid having this tree overwhelm her yard.

Some of her plants such as Cardinal Flower (Lobelia cardinalis) and Obedient Plant (Physostegia virginiana) are self-seeding and multiplying successfully, while the lovely groundcover Golden Ragwort (Packera aurea) tends to spread quite vigorously. Janet hates to kill plants, so she digs up the extras and gives them away.

She included a number of small shrubs, Virginia Sweetspire (Itea virginica “Henry’s Garnet”) and Winterberry (Ilex verticillata) , so that there is structure in the yard throughout the year and added in a native vine to make use of the fences as additional growing real estate.

While the main part of the yard is in full sun, Janet noticed a couple of areas under the deck where the growing conditions are very different. Here she has an impressive mix of native plants that prefer cooler, shadier and moister conditions. Wood Poppy (Stylophorum diphyllum), Jack in the Pulpit (Arisaema triphyllum), and Trout Lily (Erythronium americanum) rub shoulders with Trillium and Lady Fern (Athyrium filix-femina).

Alongside her Joe Pye Weed, Janet also has several Swamp Milkweed (Asclepias incarnata), and she gets great joy from finding Monarch caterpillars each year, then observing them grow and pupate. A few times she has been fortunate enough to witness a new butterfly eclose, rest while its wings expand and harden, and finally take flight!

After four years, the garden now appears full, but Janet’s commitment to native plants continues. “It’s now mostly about maintaining a balance between the plants that I have to make sure that nothing gets crowded out and finding something new if a space opens up,” she says.

Janet loves to spend time on her patio, watching the insects, birds, and critters that visit the habitat that she has created. “Wildlife is my friend,” she says.

What better confirmation could there be that Janet is a friend to wildlife than the American Robin pair who built a nest and raised their brood in the light fixture right above her favorite patio chair! 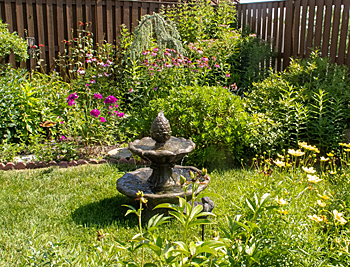 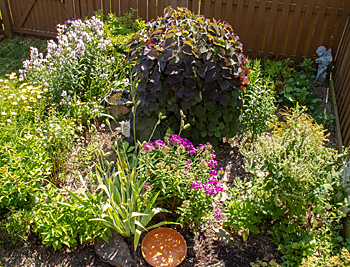 Janet Hensley’s townhome backyard proves what a difference four years and a dedication to native plants can make. Once home to scrubby grass, a few small vegetable beds, and little else, the small space is a wildlife oasis now. Photos by Anne Owen