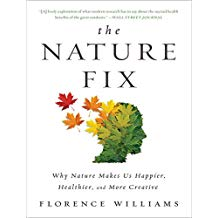 It would be a good bet that just about everyone reading this review loves to be out in nature. If you were asked why that is, you might respond that you love fresh air, the sounds of birds singing, or the smell of flowers. But are there deeper physical and psychological benefits to getting out of the house or office and spending time outdoors? That is the question Florence Williams, a contributing editor to Outside magazine, sets out to explore in The Nature Fix.

As it turns out, many psychologists and neuroscientists are trying to answer that question. Humans evolved in the savannas of Africa and are genetically predisposed to being out in nature, but are increasingly moving to cities. As of 2008, more than half the world’s population live in urban areas, and that percentage increases every day. In a very real sense, we are divorcing ourselves from our genetic heritage, and these scientists theorize that we have a biological need to get back to the natural world.

Williams speaks with many researchers and participates in numerous experiments designed to determine what are the benefits of being out in nature, and exactly how much nature creates the optimum benefit for people. Williams finds that her blood pressure decreases by a few points after a walk in the woods. In some tests, she hikes with electrodes attached to her head, and in others her cortisol (the human body’s main stress hormone) level is tested before and after a hike. Other trials seem more questionable, as they involve sitting in a university computer lab looking at pictures of nature on a screen. All of these experiments tend to show that there is some measurable benefit to being out in nature, but even that result is controversial as it is unclear whether that benefit derives from contact with nature or simply from getting out of our day-to-day routine.

Her research takes Williams around the world. She visits Japan for shinrin yoku (“forest bathing”) in national parks outside Tokyo. She goes wilderness hiking with neuroscientists in Utah, to the “healing forests” of South Korea, to the fitness trails of Finland, and to the modern park complexes in Singapore. She spends some time with war veterans with PTSD on a wilderness trip on the Salmon River in Idaho, and with teens with ADHD on a similar trip in West Virginia.

At the end of this journey, Williams introduces us to the concept of a nature pyramid like the familiar food pyramid, with daily doses of fresh air in our backyard or a nearby park at the base, weekly or monthly visits of at least one hour to wilder parks, trails or waterways in the center, and occasional trips to more remote wilderness areas at the apex.

The Nature Fix is an engaging world tour that should be read by all of us who enjoy being out in nature, which is to say by all of us.