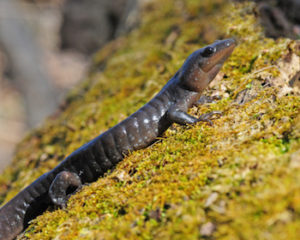 What do you think of when you think of spring? For some, those early warm spring rains bring to mind images of flowers and greener grass, of sunnier, longer days and blue skies. But many others look forward to salamanders and other amphibians (such as wood frogs and spring peepers) coming out of their winter burrows and heading toward ephemeral vernal pools. And the Jefferson Salamander  (Ambystoma jeffersonianum) is one of the earliest of the season to start its annual breeding migration.

In its native range, this elusive salamander, named after Jefferson College in Pennsylvania, extends down into southwestern Virginia and parts of Kentucky, also reaching far north into the Canadian provinces of south-central Ontario and southwestern Quebec. Here in Northern Virginia it can be found in the Piedmont of Loudoun, at the easternmost limit of its range.

This generally nocturnal critter prefers habitat such as upland deciduous forests with rich, sandy soils, and specifically likes burrowing under stones or logs, in leaf litter or in underbrush. It has specialized lungs for breathing while burrowed deep beneath the soil instead of breathing through its skin like many other salamanders. But it still needs to keep its skin moist! Once the ground starts to thaw and spring rains start falling, Jefferson Salamanders begin their yearly breeding migration.

Often they won’t have to travel very far, attempting to breed in vernal pools close to their wintering burrows. When that isn’t an option, the journey can be longer and more hazardous. Sometimes they cross roads, farm fields and developed land, traveling great distances — at least for salamanders! All the while they must avoid predators such as wetland snakes, other land-dwelling animals such as raccoons, and birds such as owls or Red-shouldered Hawks. 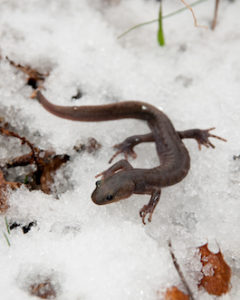 Once they reach the end of their breeding migration journey — often the same vernal pool where they were first hatched — they will remain there for up to a week. Females mate with males via internal fertilization by a spermatophore or a “sperm capsule” and then lay eggs in pools and ponds. These eggs can be found in small masses of about 7 to 40 eggs per mass, attached to twigs and rocks and other supports.

After the larvae hatch, which can take anywhere between 14 days to a few months depending on conditions, they stay in the vernal pool for two to three months, until they metamorphosize into adult salamanders. During that time they are hungry! The larvae are carnivores, and their favorite foods include aquatic macroinvertebrates such as mosquito or dragonfly larvae. Once their transformation into adults is complete, they emerge from the pool and take refuge in the closest forest.

Adult Jefferson Salamanders can live as long as six years! As adults they remain carnivorous but have a more varied diet that includes worms and insects. These amphibians play a crucial ecological role, channeling nutrients between the aquatic environment and the upland forest environment. They are also an indicator species — a species whose presence or absence can help to assess the health of an ecosystem.

Though Jefferson Salamanders are technically considered a species of least concern in their wider range, research shows they are significantly declining in Virginia and some other areas. They are rated as Tier IV by the Virginia Wildlife Action Plan (moderate conservation need). Their habitats continue to be further degraded and fragmented, largely due to increased human development, urbanization and expanding agricultural usage. Climate change may also be a limiting factor on population sizes.

Salamanders like these, as well as other amphibians, could be helped if we built more wetland areas where they could breed, and also protected the vernal pools they already depend upon. The Jefferson Salamander is an important indicator species in its environment and a fascinating amphibian that surely deserves protection.