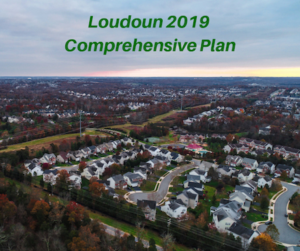 On June 20, 2019, the Loudoun County Board of Supervisors voted 8-1 to adopt the new comprehensive plan. Supervisor Kristen Umstattd cast the lone dissenting vote, and commended the Loudoun Preservation and Conservation Coalition’s new comprehensive plan committee, of which Loudoun Wildlife Conservancy is a member, for crafting an alternate plan that had a great deal of merit.

While the new plan eliminates concepts such as green infrastructure planning and conservation design, some positive policy actions resulted:

Kudos to the many citizens who made their voices heard for Loudoun’s streams, forests, meadows, slopes and wetlands during the comprehensive plan process, via their emails and post cards to county Supervisors, and through their presence at public input sessions.

Now that the comprehensive plan has been adopted, the county will begin a review and overhaul of the Loudoun County Zoning Ordinance. This process presents a new opportunity for Loudoun Wildlife Conservancy to advocate for regulations that protect essential habitats.