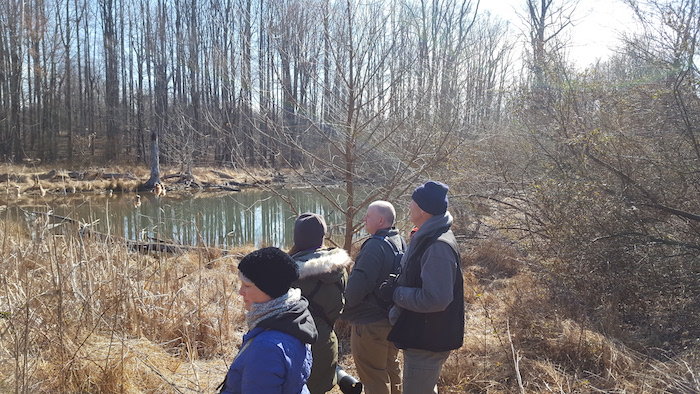 While the temperature was in the mid-20’s when the walk began, the eight participants had a very pleasant walk at Banshee Reeks Nature Preserve on Saturday, March 10. The group took the Greenway east to the eastern edge of the preserve and then looped back to the parking area via the beaver pond. We were greeted almost immediately by a flock of Cedar Waxwings feeding next to the offices as well as several raptors and vultures perched in trees that we later saw riding thermals in the sky after the day warmed up into the upper 30’s. After we started east on the Greenway we found our first of 11 Field Sparrows as well as two Hermit Thrushes. A little farther down the Greenway we had three male Eastern Towhees counter-singing around a single female. These were the first of astounding total of 15 towhees, which were mostly males. While we did get nice looks at a couple of female towhees one wonders how many more there were who weren’t visible. At one point a silent Common Raven flew over and shortly afterwards a Fox Sparrow posed for most of us in some wet scrub on the eastern side of the preserve.

For a complete list of the birds observed at Banshee Reeks see the eBird report, submitted by Jane Yocom, below.

The regular monthly free bird walk (every 2nd Saturday) at the Banshee Reeks Nature preserve is sponsored by the Loudoun Wildlife Conservancy and the Friends of Banshee Reeks.

View this checklist online at https://ebird.org/view/checklist/S43527318