It seems like every plant association has a plant of the year. As native plants grow in popularity, it is only a matter of time until someone chooses Packera aurea. This 6-12 inch shade lover is a workhorse groundcover. 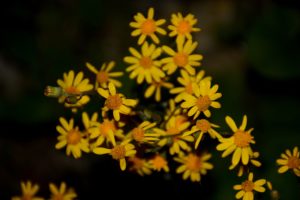 The former Latin name for this plant was Senecio aureus. Senecio means “old man”. Legend has it that the plant’s fluffy, white seed heads reminded a botanist of his grandfather’s head of wispy, white hair. The suggestion stuck and thus golden groundsel is forever stuck with the moniker ‘‘Old Man’’. However, golden groundsel is quite the opposite of frail or grumpy.

Golden groundsel has broad shiny basal leaves with a purple underside. In late spring, they send up a mostly bare shoot that is covered in golden daisy-like flowers from April thru June. Planted as a patch, it seemingly glows in a shady area. Packera is even semi-evergreen, which is always desirable. It is a nice companion plant for the late-summer-blooming wood asters Eurybia divaricata and Symphotrichum cordifolium.

Golden groundsel also has great value for wildlife habitat. In addition to cover for insects (like the firefly) and other wildlife, Packera is a great nectar source for small bees, and is known to be beneficial to almost 20 species of butterflies and moths. As an added bonus, deer don’t touch it. 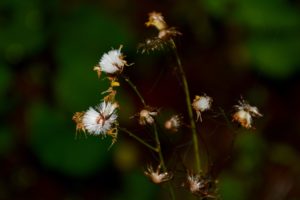 Ragwort going to fluff and seeds.
Photo by Sharon Plummer

Consistently moist soil is a must, and if planted in full sun it will appreciate some extra moisture. When you look at a plant tag and it says “full sun to full shade,” then you know there must be a spot for it in your garden. Packera aurea will spread, which is what we want in a groundcover. It self-seeds and naturalizes via rhizomes. Put it somewhere it can spread out and do its job.

Already have some Packera and want to share with your friends? It is best to divide the plants in very early Spring. In mid-March, get out your shovel to dig, divide, and disperse. Collecting the seeds is also a simple means of propagation. Collect the seeds in fall, scratch up the dirt in your selected site, sprinkle the seeds, and lightly cover with soil. Next spring you should have plenty of seedlings emerging. Golden groundsel is also commercially available so if you do not have a source for free plants or patience for seeds, many nurseries will have it in stock.

If you are not sold on golden groundsel yet, several sources claim it will even out-compete garlic mustard! It should earn plant of the year on that quality alone. While Packera aurea may not have a place in every garden, if you have space for golden groundsel, this unsung hero deserves that space.