Birds, Butterflies, Bees – and Bears at the Blue Ridge!

Nine birders showed up at the Blue Ridge Center this morning for the Loudoun Wildlife Conservancy’s regular (every 4th Saturday) monthly bird walk there. Forty-nine species of birds were found on a beautiful summer day after early morning downpours. With nesting season well along, many of the birds were heard and not seen but we did get great looks at a Yellow-throated Vireo, three Bald Eagles soaring high over the ridge, a Yellow-billed Cuckoo, Indigo Buntings, and the more common species. We found 7 warbler species including Cerulean, Kentucky, and Northern Parula. A number of species which were abundant earlier in the month, Great Crested Flycatcher, Red-shouldered Hawk, Song Sparrow, were silent and not observed at all. For a complete list of the birds pls see the eBird list below.

The real highlight of the walk was at least one and probably two bear cubs whining (drawn out wha, wha calls) for their mother and scrambling quickly through the undergrowth near Piney Run.

In addition to the birds there were several butterfly species and bees nectaring on common milkweed, which was fully in flower and smelled wonderful as the breeze pushed its scent towards us: Spicebush Swallowtail, Zebra Swallowtail, Eastern-tailed Blue, Great Spangled Fritillary and Silver Spotted Skipper. 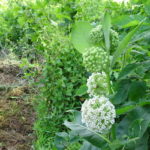 The walk was led by Joe Coleman and Jane Yocom assisted by Elliot and Nancy Kirschbaum and the others. 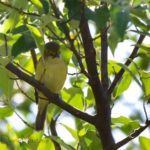 View this checklist online at http://ebird.org/ebird/view/checklist/S37778169

This report was generated automatically by eBird v3 (http://ebird.org/content/atlasva)