Twelve people showed up at the Blue Ridge Center for Environmental Stewardship in northwestern Loudon for the Loudoun Wildlife Conservancy’s regular (every 4th Saturday of the month) bird walk. After meeting at the Education Center on the north side we drove to the parking area at the end of Sawmill Rd. After walking there for a couple of hours about half of us drove over to where Arnold Rd crosses under the power lines to see if we could add a seventh woodpecker species to the six we’d already found. While we didn’t succeed we did see another American Kestrel, an Eastern Meadowlark, and a Red-tailed Hawk.

The highlights of the walk included two American Kestrels, five Ring-billed Gulls (unusual in western Loudoun County and generally only seen during migration), numerous flocks of between 150 and 200 Canada Geese flying north high in the sky for the first hour or so, and a single Eastern Meadowlark. 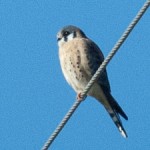 Comments:  Regularly scheduled bird walk at BRCES; met at Education Center & drove down to the parking lot at the end of Sawmill. After walking there about 1/2 of us went over to Arnold Rd where it goes under the power line and had great views of open fields and saw another American Kestrel, an Eastern Meadowlark, a Red-tailed Hawk, and a few more species.

View this checklist online at http://ebird.org/ebird/view/checklist/S34791563