Milkweed is an important host plant for many insects. Most of us know about Monarchs and their dependence on milkweed. Two other examples are the milkweed beetle and milkweed bug. The common names of these two insects can cause some confusion, but true “bugs” and beetles are classified in two separate groups.

Beetles belong to the order Coleoptera, while bugs are in the order Hemiptera. The two groups have unique characteristics and can be identified by several structural differences, including wings and mouthparts. Bugs feed with a tube-like mouthpart called a rostrum, while beetles have chewing mandibles. Beetles have hard protective wings called elytra. Bugs have wings which are often half hard, half membranous, giving rise to their name: hemi(half) -ptera(wing). They also have different life cycles. Bugs are hemimetabolous, meaning they undergo incomplete metamorphosis. The nymphs are basically miniature adults without wings or reproductive organs. With the final molt to adulthood they gain these features. Beetles are holometabolous with complete metamorphosis like butterflies. This means they hatch from an egg, go through several larval instars which do not resemble adults, then pupate and emerge as an adult. 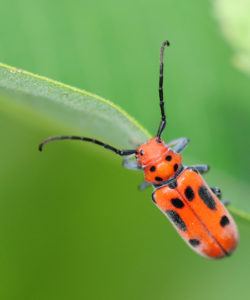 The milkweed beetle is in the family Cerambycidae, the long-horned beetles. The milkweed beetle’s scientific name is Tetraopes tetrophthalmus. Both the genus and species names mean “four-eyes” because the base of the antennae insert where the normal pair of compound eyes would be. So there are two sets of eyes, one above the antennae, and one below. Like the well-known Monarch, this beetle feeds specifically on milkweed plants. It benefits from the plant toxins it ingests, which make it an unpalatable food for predators. It advertises this fact with aposematic or “warning” red and black coloration. The beetles lay eggs on the milkweed plant stems. The eggs hatch in the fall and the larvae bore into the stems and overwinter in the roots. After pupating, the adults emerge in early summer.

The milkweed bug, Oncopeltus fasciatus belongs to the family Lygaeidae, the seed bugs. Its food is the seeds of milkweed plants, so it can commonly be found on the seed pods. Like the milkweed beetle, it sequesters the toxins produced by the plant and it also has black and red coloration. Young milkweed bug nymphs are orange. The adults migrate and overwinter in southern states.

Both of these insects are dependent on the milkweed plant for food, so providing these plants will help them, along with other insects such as Monarch butterflies!