Common Milkweed: A Plant of Many Virtues 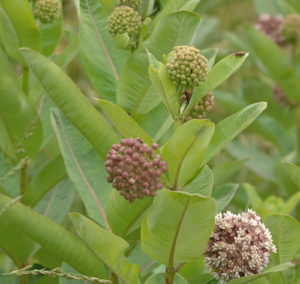 Common Milkweed’s story is also a story about us, our values and how we live. Before the days of modern conveniences like grocery stores, it was considered a useful plant. It was eaten, although it is toxic and requires special preparation to be safe for human consumption. It was a source of fiber utilized in making rope and fabric. It was a valued medicinal plant in the treatment of asthma, kidney and gallstones, ringworm and warts. It was used as an emetic, diuretic, laxative and contraceptive. During World War II, children were paid to collect milkweed floss for stuffing floatation vests. Milkweed had a place in our hearts as well – fluffy seeds carried on the wind represented hopes for wishes come true. However, as people relied more on manufactured goods, our connection to the sources of products faded. Common Milkweed became a forgotten plant, growing along dusty roads and in abandoned lots and fields. Eventually, its appeal was lost altogether and milkweed became the bane of farmers who disliked its vigorous growth. Gardeners found it untidy and quickly removed it. It took the loss of unimaginable numbers of Monarch butterflies for milkweed to once again capture our attention. While always valued by ecologists as well as native plant and butterfly lovers, today “weeds”, such as Common Milkweed, are being recognized for their key role in supporting pollinators and other beneficial insects. Monarch butterflies and their host plants, the milkweeds, have come to symbolize the broken link between us and the natural world – and also the way to reconnect.

There are approximately 100 different species of native milkweeds (Asclepias sp.) in North America. Named for the Greek god of medicine and healing, Aesclepias, the milkweed family’s milky latex secretion contains cardiac glycosides which are toxic to most animals. Fortunately, milkweed’s bitter taste is typically sufficient to prevent livestock and wildlife from eating it. While toxins provide formidable defense for the plant, some insects, like Monarch butterflies, evolved to use them for their own protection. Monarch caterpillars do not digest the toxins but rather sequester and concentrate them, making them even more toxic than the plant itself. Toxins remain in the butterfly as well, helping to protect it from predation on its long journey. 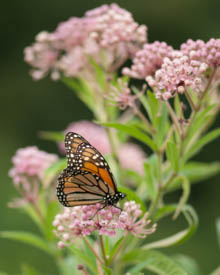 The relationship between Monarchs and milkweeds is well-known. Milkweed is the host plant for Monarchs, meaning Monarchs will lay eggs only on milkweed plants and milkweed is the sole source of food for caterpillars. Of the all the milkweed species used as host plants by Monarchs, Common Milkweed is most favored. But Monarchs aren’t the only insect to use Common Milkweed. One study found 147 animal and insect species spend all or part of their lives connected to it. Common Milkweed is typically found growing with other beneficial native plants such as asters and goldenrods. Together, these plants and insects create the vibrant milkweed community, a life support system not just for Monarchs, but also for many important beneficial insects that pollinate our foods and assist in pest control.

Common Milkweed (Asclepias syriaca) is easily identified. Standing taller than most of its companions, up to 6 feet in height, its dark green leaves are broad elliptic blades with velvety undersides. Common Milkweed blooms from May till August, bearing umbels of small pink, intensely fragrant and complex flowers, up to 200 in a cluster. Many of us remember the scent from childhood summers spent playing in fields of wildflowers and butterflies, a time in the not too distant past when we didn’t even know where Monarchs spent the winter. 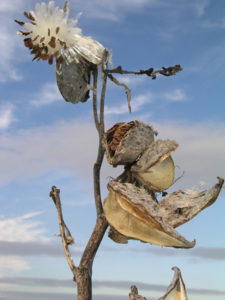 Common Milkweed spreads in two ways. It colonizes an area by rhizome – what appears to be many plants in one location are most likely multiple shoots of one plant connected underground. It also disperses seeds to distant locations. Pollination of milkweed is a fascinating process involving precision and chance. A plant cannot self-pollinate so it takes a visitor from another milkweed patch to perform this service. Milkweed entices pollinators by offering abundant, easily accessible nectar. While taking what milkweed so freely gives, an insect’s leg might slip into a narrow slit in the flower where pollen is hidden in a waxy sac, called a pollinarium. Pollinaria are sticky and attach on contact. When the pollen-carrying insect visits a plant in a different patch, it might make contact in just the right way for pollination to occur. Sometimes this method of cross-pollination is hazardous or even fatal to insect pollinators. On occasion, one sees a trapped bee or fly dangling by a leg it cannot release from a flower, an inadvertent victim in the essential need to sustain genetic diversity.

While only about one in 150 flowers is pollinated, the resulting seed pod contains about 200 seeds. As summer turns to fall, a seed pod orients toward the sun and matures. Eventually the pod splits open and releases its seeds. Seeds are windborne and can travel long distances on silken parachutes, called comas or floss. Some land in places where they lie undisturbed and moist under cover of autumn leaves. Cold winter temperatures stratify the seed, a process necessary for germination. As anyone who has tried to grow milkweed from seed knows, even in the best of circumstances germination rates tend to be low. But despite the challenges of milkweed propagation, there was always enough as long as there were places it could grow.

While reasons for the declining numbers of Monarchs are complex, it is without doubt that milkweed habitat is needed to support Monarch populations. It is also indisputable that since 1996, industrial farming and the continued use of GMO agriculture utilizing the widespread use of herbicides, like Round-Up, have resulted in the loss of milkweed and other critical native plants in large portions of the Midwest and other farm belt areas. This is the primary migratory route for Monarchs and milkweed habitat must be present to support them. Urban development and aggressive roadside management have also contributed to the loss of Monarch butterfly supporting milkweed habitat throughout North America. In the winter of 2014-15, we read appalling reports of a 90 percent decline in the number of Monarchs in their winter sanctuaries in the mountains of Mexico. The realization we could lose Monarch migration in our lifetime spurred action that previous warnings could not. Partnerships and alliances formed between diverse groups. Children, citizens, activists, scientists and politicians rallied and spoke out to protect the great Monarch migration. And everyone agrees at the root of this effort is the need to create and protect milkweed habitat.

Today, we understand growing and protecting Common Milkweed benefits not just Monarchs, but also many other less charismatic but tremendously important pollinators. Milkweed and other native nectar plants are being planted in gardens, municipal properties and along highways. Departments of transportation are adjusting mowing schedules to protect caterpillars. Municipalities are reevaluating their use of pesticides and herbicides and spraying is being eliminated or at least reduced. Even the manufacturer of Round-Up, Monsanto, has pledged $4 million for habitat restoration, education and outreach, and milkweed seed and plant production. People are speaking out against GMOs and are choosing to eat locally grown, organic foods from farms where the presence of pollinators and native plants like Common Milkweed are encouraged.

We are learning so much from this humble yet extraordinary plant of many virtues. We are redefining “weed” as a plant of not just ecological value, but of beauty. We are finding a place for Common Milkweed not only in our gardens, but in our hopes for the future as well. No longer forgotten, Common Milkweed stands as an example of what can be lost but also the power we have to change for the better. It’s so simple. Plant Common Milkweed and the rest will happen naturally. And don’t forget, when you see a pod with seeds ready to float away, make a wish!

Borders, B. and E. Lee-Mader. “Milkweed: A Conservation Practioner’s Guide.” The Xerces Society for Inverterbrate Protection. Portland, OR. 2014

Gustafson, K., and A. Agrawal, B. Lewenstein and S. Wolf. “The Monarch Butterfly through Time and Space: The Social Construction of an Icon.” BioScience Advance Access. May 6, 2015.