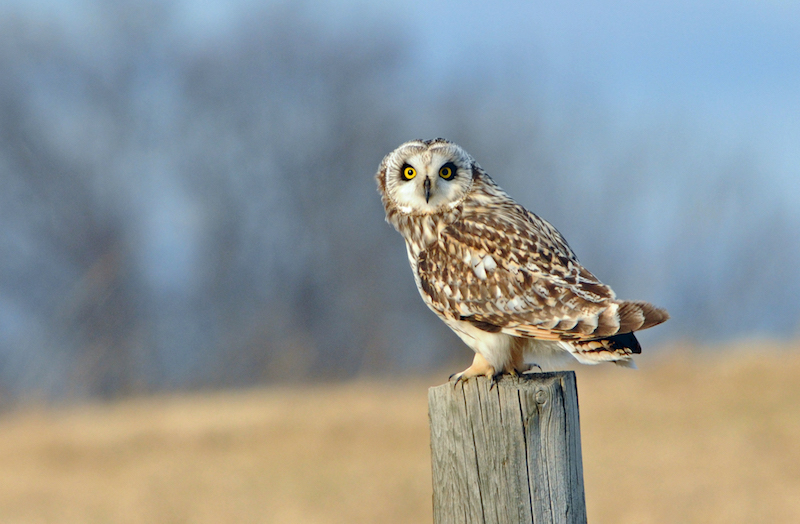 During the spring and summer months in northern Virginia, we enjoy the calls of our resident owls: the resonant hoot of the Great Horned Owl, the familiar “who cooks for you” of the Barred Owl, the melodic whinnies and trills of the Screech Owl, and the haunting scream of the Barn Owl. Additionally, fall migrations bring four transient owls—Northern Saw-whet, Long-eared, Short-eared and Snowy—to local woodlands, open fields and marshes. These owls are usually silent in their wintering grounds; however, we can’t depend on their calls to tell us they’re here. We need to know when and where to look if we want to see them.

Northern Saw-whet owls (Aegolius acadicus) are among the most migratory owls in the United States. Many of these tiny birds, often juveniles, leave their northern and western breeding grounds in September to travel as far south as Virginia by late October or early November, with some continuing on to the Gulf Coast and central Florida. They are most likely to travel on clear, cold, moonless nights with light westerly winds following passage of a cold front. By February, Saw-whets are following warming south winds back to the coniferous forests of southern Canada and the northern U.S. to nest.

Saw-whets are instantly recognizable by their prominent facial disk surrounding enormous yellow eyes that seem to glow from within. These nocturnal hunters roost by day in woodlands, parks and gardens. They prefer low dense conifers that hide them from the predatory eyes of Barred and Great Horned Owls. Some will perch as low as 5 feet off the ground where they appear surprisingly approachable and almost tame. But don’t approach too closely! Remaining motionless when threatened is a Saw-whet protective behavior that may indicate fear rather than calm.

Saw-whet Owls are named for their rarely heard repetitive metallic alarm call, which some say sounds a like a handsaw being sharpened on a whetstone. Despite being arguably the most endearing and smallest owl—weighing only about 3 ounces—east of the Mississippi, these fluffy, cinnamon brown, “sit-and-wait” hunters are fierce predators capable of taking birds as large as cardinals or killing six mice in succession to cache for later meals. If you’re lucky enough to come across one at its roost, you might find it perched on a rodent, thawing it for dinner.

Long-eared Owls (Asio otus) are found in temperate forests throughout much of the northern hemisphere with nearby populations in boreal forests from southern Canada to the central U.S. as far east as the mountains of Virginia. They are found year-round over their breeding territory, but some range farther east and south during the winter months. The precise movements of these elusive woodland birds are unpredictable and not well understood.

Long-eareds are beautiful crow-sized birds with richly colored earth-toned plumage, prominent and closely separated ear tufts, a distinctive facial disk, and bright orange-yellow eyes that give them an alert and perpetually surprised expression. At times, their long ear tufts may be flattened, making them look very much like another winter visitor, the Short-eared Owl. Long-eared Owls are secretive by day, roosting in dense coniferous thickets, often in communal groups of up to 50 birds where courtships may begin. By night they are aggressive hunters that use their asymmetric ears and superb hearing to locate prey in near total darkness. These maneuverable, buoyant fliers are search-and-chase predators capable of moth-like, hovering flight that serves them well in pursuit of prey and dodging larger raptors that would prey on them. 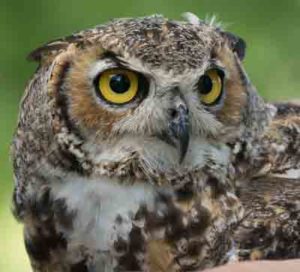 Short-eared Owls (Asio flammeus) are similar in size and color to Long-eared Owls with less vivid tawny to buff upper plumage, a pale and lightly streaked breast, and tiny ear tufts. They have clear yellow eyes surrounded by dark shading in an otherwise light facial disk. These “marsh owls” roost in communal groups of up to 200 birds in open grasslands unless severe weather forces them to seek shelter in thickets, but this doesn’t mean they’re easy to find! Their mottled brown plumage is the ideal camouflage, making it almost impossible to spot them in winter grass.

Short-eareds are among the most diurnal owls. They can often be seen in late afternoon, flying low over open country listening for prey and occasionally hunting almost side by side with Northern Harriers on dark cloudy days. They occupy the same territory as harriers and resemble the larger female hawk, but the owl’s flat-winged, moth-like flight is easily distinguished from the harrier’s smooth glide and stiff wing dihedral.

Short-eared Owls are generally silent. But when they are alarmed or during courtship displays, which begin in late winter, they clap their wings below their body in 2 to 6 second bursts, creating a loud smacking sound similar to that of the cracking of a whip. This widely distributed owl breeds in northern Eurasia, southern South America and across the upper third of the U.S. as far north as Alaska and east to western Virginia. Northern populations are migratory and nomadic. Like the Long-eared Owls, their migratory patterns are irregular and not well understood. Each year a portion of the population disperses throughout the U.S. and as far south as central Mexico bringing them to our area from early winter to late spring.

Very irregularly, some migrants venture as far south as northern Virginia in an irruption, or rapid increase in population. In 2012, we experienced one of the largest Snowy Owl irruptions in years with birds traveling as far south as Oklahoma and Hawaii. Irruptions typically occur when prey—lemmings in the case of Snowy Owls—are scarce and birds are driven from their normal territories in search of food. In 2011, the lemming population was unusually high, which led to a very successful breeding year for the owls. In a year of plentiful food, Snowy Owl clutch size can be as high as 14. The resulting overcrowding and competition the following year forced young, inexperienced owls south in impressive numbers. In an irruption year, these diurnal owls can be found roosting in open spaces on lakeshores, marshes and even city buildings.

Snowy Owls are particularly fond of airports, possibly because the open spaces resemble their familiar tundra habitat. Sadly, in November 2011, the first Snowy Owl ever sighted in Hawaii was shot and killed by the U.S. Department of Agriculture’s Wildlife Services Division at Honolulu Airport because of concerns that it would interfere with aircraft. So while it can be thrilling to observe a Snowy Owl, remember that they are birds of distant landscapes and are unfamiliar with the hazards of populated areas—in turn, the consequences can sometimes be disastrous.

Dark days, long nights and bare branches provide the perfect opportunity to observe our winter owls. So dress warmly, venture out into the cold, and be quiet and careful. The reward might just be a glimpse of the brightly glowing eyes of a winter owl.