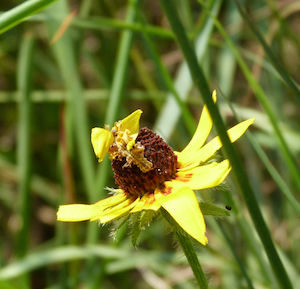 The larva of the Wavy-lined Emerald Moth (Synchlora aerate), also called the camouflaged looper, is a fairly common caterpillar you might not see because it uses a unique method for hiding. This moth, a member of the family Geometridae, overwinters in the larval stage and emerges in the spring to feed on flowers. It has a large range covering most of North America, from southern Canada south to Texas. It feeds on different types of plants, mostly composite flowers, in addition to many flowering shrubs and trees. The adult moth is green with wavy white transverse lines. It is a small but beautiful moth, with a wingspan of about an inch, and is a nocturnal flier that is attracted to light.

While some insects use camouflage or mimicry to outwit predators, this caterpillar blends these two defenses in an intriguing way. When we consider insect camouflage we often think of creatures like stick bugs or katydids that have evolved to look like their surroundings. Mimicry, on the other hand, involves looking like a completely different creature. For example, the harmless Robber Fly has evolved to look like a bumblebee, and the slightly less toxic Viceroy Butterfly looks just like the toxic Monarch.

The Wavy-lined Emerald Moth caterpillar’s defense is different from both of those adaptations. This caterpillar will attach bits of the plant material on which it is feeding to its back with bits of silk in order to blend into its host plant and avoid detection. If it is feeding on Rudbeckia petals, it will “wear” those. If it is feeding on the Rudbeckia flower head, it will attach pieces of that part of the flower. If it moves to a Liatris, it will choose parts of that flower to cover itself and transforms into a purple caterpillar. It also presumably detaches and replaces the parts as they wilt, since it always seems to be covered in fresh colorful adornments that match the meal perfectly. So while it is essentially using camouflage, this insect is an active participant in the process. Could this be called “botanical mimicry?” Perhaps not, but it works so well that this fairly common caterpillar is easy to miss. So while inspecting flower patches this summer look closely and have the camera ready. This little creature just might be hiding in plain sight!