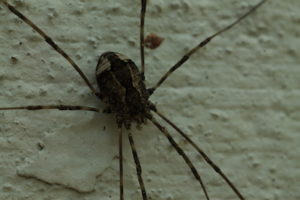 You probably see them often, especially in late summer and fall. You may have childhood memories of encounters with these little creatures we know as daddy longlegs or harvestmen. But how much do you really know about these conspicuous arachnids?

Are they spiders? Surprisingly they are not! While they share many traits with other members of the class Arachnida (spiders, ticks, scorpions) they belong to the order Opiliones. Our local harvestmen are one of approximately 6,500 species found all over the world. The most obvious difference between harvestmen and spiders is in the body. Harvestmen have one body part as opposed to two. The adult body is about one-quarter inch long. They have four pairs of very long legs, two antennae like appendages known as pedipalps, fang like mouth parts, and two eyes on a short stalk. However, they do not possess silk glands or venom as spiders do, so they do not build webs to ambush prey. Instead they are opportunistic predators that eat live insects they catch as well as decaying plant matter, dead insects, fungi, and even bird droppings. 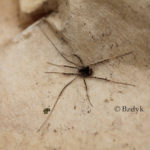 Harvestmen spend much of their one year of life in cool, shady places like forests floors and trees. Females lay hundreds of eggs in the soil during the fall. Eggs overwinter in the ground and hatch in spring. The young are small versions of their adult ancestors and molt many times during their growth phase in spring and summer.

Harvestmen fall prey to many of the same predators that eat spiders, such as birds, larger spiders and wasps. As a defense, some harvestmen will release a foul odor from glands near their front legs or will shed a leg that continues to move, possibly to distract a predator during the harvestman’s escape.

You may have heard the old tale that “harvestmen possess the strongest venom in the animal kingdom, but they do not have fangs so they cannot harm you.” This myth is untrue on both counts. They do not have any venom, but they do have fangs. Their fangs are designed for pulling food into their mouthparts. They have never been known to bite and are considered harmless to humans. 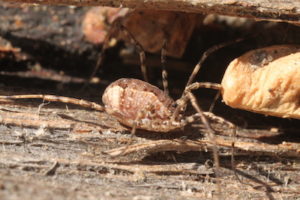 They may have gotten the name “harvestmen” because they are more active and therefore more noticeable in fall’s cooler weather. So enjoy the autumn weather and any chance encounter with the mysterious, harmless and ubiquitous harvestmen!