“We spray our elms and the following springs are silent of robin song, not because we sprayed the robins directly but because the poison traveled, step by step, through the elm leaf – earthworm – robin cycle. These are matters of record, observable, part of the visible world around us. They reflect the life-or-death that scientists know as ecology.” Rachel Carson, Silent Spring, 1962

While walking through my neighborhood one morning last spring, I saw dead and dying earthworms everywhere on the sidewalks. Robins were busy eating the dying worms. A hawk was hopping around on a nearby golf course also eating the “easy” meal. I later learned our lawns were treated the day before with an herbicide (active ingredient, Dithipyr). This was not a scene from Silent Spring 50 years ago — this was in my own community in 2012. I was told nothing toxic had been applied. 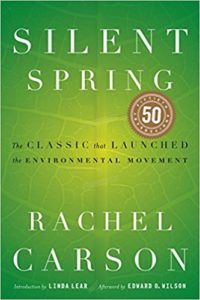 Fifty years after the publication of Rachel Carson’s seminal book Silent Spring, our birds have not been silenced but they are quieter. Signs of disturbance in nature are seen everywhere. Some bird populations have plummeted at the rate of 40 to 80 percent in the past decade due to many factors including habitat loss and environmental hazards. Barometer species which indicate the health of the environment, such as bats, butterflies and bees, are sickening and disappearing. Human health has been impacted: asthma, autism, learning disabilities, birth defects, reproductive dysfunction, diabetes, Parkinson’s and Alzheimer’s diseases, and several types of cancer are on the rise and have been associated with environmental toxins. Babies are born with pesticides already in their small bodies, passed from their mothers before birth. In the 50 years since Silent Spring, we have added thousands of new chemicals despite not having full knowledge of their effects on soil, water, wildlife or humans.

However, there are also amazing stories of recovery since Carson raised the alarm about pesticides. We most likely would not enjoy the majestic presence of Bald Eagles, Peregrine Falcons or Osprey if it were not for Silent Spring. The book raised awareness of the interconnectedness between man and nature, and the dangers of pesticides like DDT. Silent Spring generated a storm of controversy and there were many attempts to discredit Rachel Carson. In the end, sound science, meticulous research and overwhelming evidence exposed the hazards of DDT and led to its ban. Awareness of dangers posed by pesticides impelled the public to begin taking steps to limit the use of toxic chemicals in their own communities. Bald Eagles, Peregrine Falcons and Osprey are living testimonials to what was almost lost due to widespread use of chemicals not completely understood. Their numbers today represent what can be accomplished when people choose to take action against threats to the environment.

The most important legacy of Silent Spring is awareness that nature is vulnerable to human intervention. Our actions, or lack of action, have the power to change, or not change, policies which impact the health and safety of our surroundings. Rachel Carson’s prophetic words resound today as they did 50 years ago: “Man’s attitude toward nature is today critically important simply because we have now acquired a fateful power to alter and destroy nature. But man is part of nature, and his war against nature is inevitably a war against himself. [We are] challenged as mankind has never been challenged before to prove our maturity and mastery, not of nature, but of ourselves.”

What should you do if you are concerned about pesticide use and environmental toxins around your home and family?

Choices such as these support the health of your family and community today and in the future.

Rachel Carson’s luminous writing and powerful influence led to momentous social change in America. On the 50th anniversary of Silent Spring’s publication, we honor the author and her extraordinary work. Be inspired by Carson’s passion and love of nature. Find your voice and speak out for the beauties and mysteries of our natural world. From the tiniest of insects to the complexities of human beings, every living thing is intimately connected to the rest, and one cannot live without the other.