The Impact of Pesticides on Bee Populations

Bee populations have been taking a nosedive in recent years. While many believe that a number of factors including habitat destruction, parasites, and disease have contributed to what is commonly referred to as Colony Collapse Disorder, there is new research that increasingly points to the use of pesticides known as neonicotinoids as the main culprit in the deterioration of bee populations worldwide.

All bees are pollinators, meaning they are part of a group of insects and animals responsible for ensuring the fertilization and reproduction of over 75% of our flowering plants and 75% of our crops. What many people don’t realize is that without a healthy, resilient bee population, not only are we at risk of losing $15 billion in crop value, “much of that from specialty crops such as almonds and other nuts, berries, fruits, and vegetables,” according to the USDA, but that “about one mouthful in three in the diet directly or indirectly benefits from honey bee pollination.” Bees are a critical component of our food chain because they pollinate crops intended for human consumption. Without bees, the entire food chain is at risk of collapse.

Bees also pollinate crops used to feed the nation’s livestock as well as corn grown for the production of the biofuel ethanol. This agricultural area has come under fire recently due to the heavy use of pesticides, and neonicotinoids in particular, in order to prevent crop loss. While the government has established what they consider “safe” levels of the pesticides for application to the seeds used for planting, these levels still pose a serious risk to bees. The concentration of the pesticide may not be high enough to cause immediate death, but the toxins are absorbed into the seed and cause issues for the bee through contact with the plant’s pollen. It is now believed that this exposure may compromise the bee’s immune system, causing behavioral problems and increased susceptibility to disease and parasites.

According to the EPA website, several European countries have banned the use of neonicotinoid pesticides. An immediate increase in the bee population was reported throughout Italy after the ban was imposed, resulting in an extension of the ban indefinitely. Now, several other countries are following suit. With these remarkable reports, it’s hard to believe the United States has yet to take action and impose a ban here at home.

Until the U.S. takes steps to prohibit the use of neonicotinoids, there are things we can do as consumers and homeowners to reduce their impact on our own local bee population. When purchasing products available at garden centers for use on your garden or lawn, consider the following statistics as reported by The Xerces Society for Invertebrate Conservation: 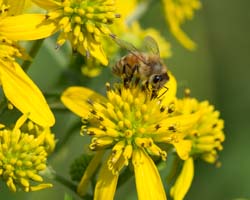 There is no direct link demonstrated between neonicotinoids and Colony Collapse Disorder (CCD). However, recent research suggests that neonicotinoids may make honey bees more susceptible to parasites and pathogens, including the intestinal parasite Nosema, which has been implicated as one causative factor in CCD.

Many neonicotinoid pesticides that are sold to homeowners for use on lawns and gardens do not have any mention of the risks of these products to bees, and the label guidance for products used in agriculture is not always clear or consistent.

We can also take steps to provide a beneficial environment for the bees in our area. The most important factor in a bee-friendly yard is eliminating, or at least severely limiting, the amount of chemicals you apply. Also, check labels to ensure you are not applying chemicals that fall into the Nicotinyl pesticide family, specifically those containing clothianidin, thiametoxam, and imidacloprid. Bees also require shelter in the form of bushes, trees, and flowering plants where they can seek protective cover. Lastly, in order to provide opportunities for bees and butterflies to have access to pollen throughout the spring and summer seasons, plant a variety of native, flowering plants. Your local nursery can help you find a wide selection to choose from.

The full report from the Xerces Society of Invertebrate Conservation can be found at  http://www.xerces.org/neonicotinoids-and-bees/