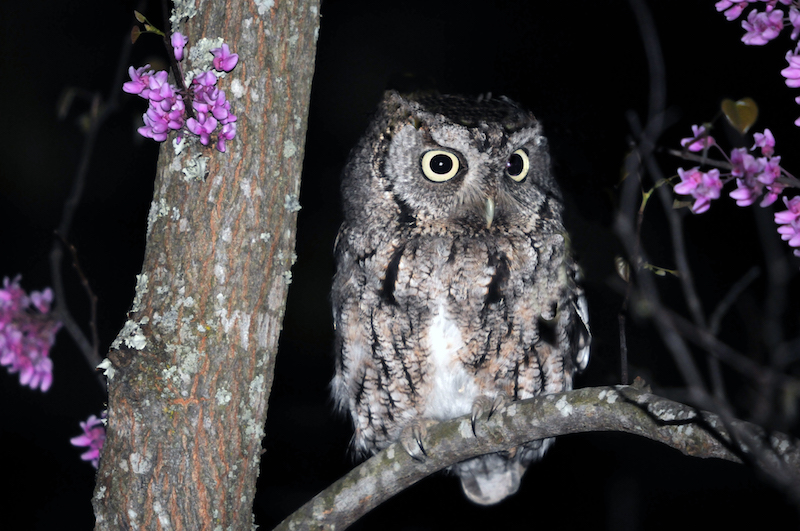 If you’re very lucky as you watch the moths dance around your porch light one summer evening, you might see a larger shape glide silently into view, snatch one with surprising agility and quickly vanish into the dark. A Screech Owl (Megascops osio) has just found a snack for herself or a tidbit for her young.

Eastern Screech Owls are small, adaptable, woodland owls that can be found year round throughout the United States, east of the Rocky Mountains. The average male is 8.2 inches tall, weighs 7.0 ounces and has a 21-inch wingspan. The slightly larger female averages 9.2 inches tall and weighs 7.3 ounces with a 22-inch wingspan. There are two color morphs, red and gray, which are not related to age or gender. Both can be found throughout the range, although one morph will often predominate in an area. The Screech Owl’s plumage closely mimics the bark of a tree, camouflaging the birds so well they can hide in plain sight. When threatened they stand perfectly still, close their large yellow eyes, and compress their feathers to blend almost seamlessly into the background. It follows that habitats with gray barked trees would better protect gray screech owls while those with reddish barked trees or foliage would offer more protection to red ones. Red Screech Owls also have a higher metabolic rate than gray owls so are less likely to survive in areas with heavy winter snows when food is scarce. Screech Owls are sometimes called “horned owls” because of their feather tufts that resemble horns. The purpose of these tufts is unknown but they may play a role in camouflage or work in conjunction with the owl’s facial disk to direct sound to their ears.

Screech Owls are strictly nocturnal hunters, active from dusk to dawn, when their superior night vision and spectacular hearing give them a decided advantage over prey, and darkness protects them from diurnal predators. Like the moths they often hunt, these tiny owls are buoyant, sometimes erratic fliers, with soft edged feathers on their broad wings that allow them to move soundlessly through the air in search of a meal. Despite their diminutive size and wide eyed, innocent appearance, Screech Owls are fierce predators, taking an unusually wide variety of prey. They will hunt rodents as large as squirrels, bats, small snakes, lizards, birds larger than themselves, and just about anything else they can grasp in their small, but surprisingly strong, feet and very sharp talons. They are even known to fish along the edges of streams and ponds.

Screech Owls nest and roost in natural tree cavities, usually 6 to 20 feet above the ground, but will readily use nest boxes. They raise one brood of four to six young each year from March in the southern regions through July further north. Screech Owls habituate easily to people, and as a result they are often found in suburban and urban areas. Yet because of their cryptic plumage and nocturnal activity, they are rarely seen. You will know they’re around, however, by their gentle call that contradicts their name. A Screech Owl’s primary call is a gentle haunting trill, more song than screech, which has given them common names like “ghost owl” or “shivering owl.” A second song sounds remarkably like the whinny of a tiny horse. So whether it’s a warm summer evening or snowy winter night, if you listen carefully you may hear the poignant sound of a Screech Owl singing.