On Sunday, Donna Quinn and I decided to go for a visit over to the Bald Eagle nest at the Dulles Greenway Wetlands Mitigation.

By our calculations, the eggs should be hatching and we just had to go see. 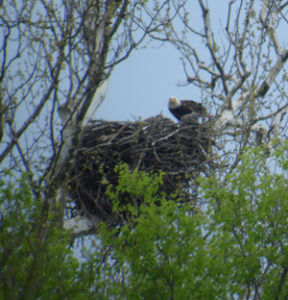 Well, we were not disappointed.  As we pulled out the spotting scope and walked towards a break in the trees where we could get a clear shot of the nest, we noticed that no one was sitting on the nest.  That was clue number 1.

Clue #2 that something was up…….one of the adults was standing guard over the nest, a few branches away.

But things can happen, and nests can fail, so while we hoped that the two clues seen so far meant babies, neither of us said a word.

Instead, we got the scope into position and peered in through the eyepiece, seemingly trying to reach with our eyes to try to move this branch or that so we could see what was inside.

Then it happened….a little head popped up and bobbled around!  It must be a pretty young nestling as it seemed to bob its head up and down a bit and perhaps take rests since it would just pop up once in a while.

The sun haze was a bit much so my photos are not that great.  In fact, they’re sort of like the old “loc ness monster” photos from the ’70s….you can kind of make out the shape but it’s a bit blurry. In coming days, we’ll get more (better) photos.

For now, see a larger version of the photo here on our Facebook page. You can see it has its mouth open, no doubt waiting for lunch to arrive!

We also hope to see more little bobbing eaglet heads over the next few days.  In the past, this pair has raised 2-3 eaglets and this year will hopefully follow in that tradition.