The Forest: A Model for Urban Design

By Bonnie Deahl, The Care of Trees 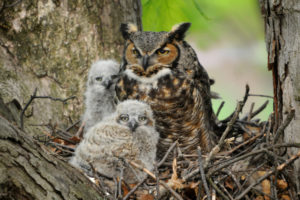 It is no secret that the size of our forests is diminishing. The value of the deep forest as a habitat goes beyond what we see on the surface. As we lose forests to development and urban progress what is truly lost cannot be recaptured in our lifetimes.  The Mid-Atlantic once was blanketed by deep forest and had the highest diversity of flora and fauna of any region in the U.S. Today only a small fraction of the forest remains and what does remain is greatly fragmented. Species that once thrived in the “deep forest” now must either find a larger forest or fail to reproduce since their habitat is no longer suitable for their survival. Fragmentation of the forest means that a larger forest is cut into two or more smaller forests. This fragmented state of the forest creates less diversity and therefore cannot hold wildlife once held by a larger forest.

The individual species that are lost are species that thrive in a deep forest. Have you noticed that you hear fewer Wood Thrushes in spring? The delicate flute-like song of the thrush is in jeopardy of being lost as large expanses of undisturbed native forests are chipped away. A thriving forest has its tallest story, the canopy, consisting of large shade tree species of oak, maple, hickory, elm, and sycamore. In the next layer, or understory,  one finds different species including Blackhaw viburnum, dogwood, redbud, and spicebush. On the ground forest floor, native wildflower species and ephemerals rise and fall with each season. This habitat of flora species is what supports the animals that live and thrive here, from black bear to deer, to raccoon, mink, skunk, and opossum to name a few. 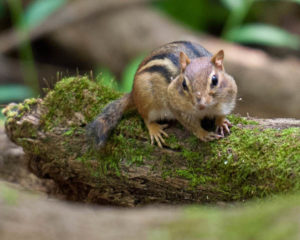 A very busy member of the forest community, the chipmunk Photo by Nicole Hamilton

Exotic plant species also threaten our native forests. Species that are found in urban settings and landscapes have escaped into our forests. Because these escaped species are often more vigorous than native species, they wreak havoc in the natural forest by taking over and often creating allopathic effects suppressing other species from growing in their vicinity. Some of the common culprits found in our forests that do not belong are the Winged euonymus, Callery pear, Japanese barberry, Creeping euonymus, Chinese wisteria, and English ivy, to name a few. They are part of a vicious cycle and are difficult to control once they get established in the forests. To a trained eye, these species are seen as a scourge which diminish native species of plants, animals, and birds that would otherwise find a home in our local forests. Many of our native animals and birds will not feed on these escaped species and cannot survive in habitats overtaken by them.

Trees were never meant to live as individuals and without other species, trees live in a monoculture likely consisting of nothing but turf grass. Further, trees planted and mulched individually have less chance of survival than those living as a community. We can take a valuable lesson from what is being lost in our forests and compensate by developing habitats in our urban landscape which create plant communities rather than a tree here and a tree there. Consider designing a series of large planting beds that resist order. In these beds choose species that create a diverse canopy. Root systems should be planted in a rich layer of organic matter. In time and with establishment these trees will create their own new forest and will attract species found in that particular habitat.

The forest has its own natural order. It seems random at first glance and has no need for the symmetry man adds to his designs. There is elegance in simplicity to this random order and it takes vision to create an urban habitat of value which imitates this natural design. Creating a community of trees is something we must seek to achieve in our future landscape designs. Ecosystems are not entities in themselves and cannot thrive as individual parts.