Happy New Year! Thanks to your hard work, 2011 brought several notable reports, including confirmed breeding for Hooded Merganser and Dickcissel, probable breeding for Northern Bobwhite, as well as observations of Swallow-tailed Kite, Scissor-tailed Flycatcher, and Common Redpoll. Let’s see what 2012 will bring!

Reminders and Tips
1. Several atlas documents have been updated and will soon be posted to the atlas website, including the Block Assignments, Atlas Handbook, and Field Cards (with the new taxonomic order).
2. All block owners should have been contacted by your Regional Coordinator regarding your block’s status. Please notify your coordinator or myself if you have any questions or concerns or would like to take on another block.
3. This link from The Cornell Lab of Ornithology provides a nice comparison of Sharp-shinned and Cooper’s Hawks, two species that can pose identification challenges.

Species of the month – Snowy Owl (Nyctea scandiaca)
• This fall and early winter, listserves have been buzzing with reports of Snowy Owls south of their normal winter range, signaling an irruption year! Below is a static view of observations through November 30 (map and info taken from The Cornell Lab of Ornithology): 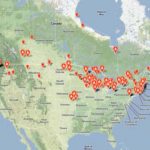 • The boom-and bust cycles of the Snowy Owl’s primary food choice, lemmings, can determine if they are able to overwinter in the north or whether they are forced to move farther south in search of food. Since Snowy Owls are appearing in numbers in the Lower 48 this year, one would guess the population of lemmings has crashed. Alternatively, the lemming population may be at historical highs allowing for a very successful breeding season, pushing inexperienced birds farther south as a result of overcrowding and competition.
• The birds we see in the states are already stressed, so if you do find a Snowy Owl please keep a good distance to not disturb them.
• Rough-legged Hawks are often seen in good Snowy Owl years, so that’s more incentive to take a second look at those perched Red-tailed Hawks we drive by, especially those at the very top of the tree. Upcoming Atlas Training Please let me know if you’re interested in refreshing your atlasing skills with a training session in late Feb/early March or if you know of someone that may be interested in atlasing.

Atlas Progress
72 atlasers have spent 3,350 hours in the field documenting 37,085 sightings. You have recorded 236 species, with 100 of these species having a confirmed nesting status. Field cards have been reported for 47 blocks and 12 blocks are considered complete (though sightings can still be reported).