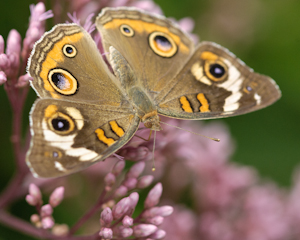 On Saturday, August 7, over 60 volunteers gathered into eight teams to count butterflies. This was our fourteenth annual butterfly count, and we were all geared up to watch for fluttering wings and flashes of color on a sunny day.  The butterfly count protocol is based on the same methodology used for the Christmas Bird Count, with a count circle that is used consistently year after year in order to be able to compare data across the years and look for trends.  Now having 14 years of data to look back on, a robust data set is being developed to monitor butterfly populations.

Our teams met up in locations from Leesburg to Purcellville to Neersville and worked throughout the day, from 9am to about 4pm, counting and identifying all the butterflies they could find.  In all, we identified 4,296 individual butterflies across 53 different species.  This was a good year for butterflies overall.  In past years, we have seen plummeting numbers for some of our more common butterflies.  However, this year’s populations were up to more consistent levels, and we had increased numbers in many of the lesser-seen species.  Just the right mix of sun and rain must have occurred to make the host and nectar plants grow.

The species that were higher than normal this year included:
Black Swallowtail:  58 — compared to only about 10-15 in past years
Variegated Fritillary:  95 — the second highest counted in 14 years
Pearl Crescent:  258 — in 2005 numbers peaked at 932 but plummeted the next year, slowly making a comeback
Common Buckeye:  172 — prior to this year, the most seen on a count was 39
Red-Spotted Purple and Northern Pearly-eye:  71 of each — their numbers took a nose-dive in 2004, and they were almost absent on our count for a few years
Hackberry Emperor:  65 — as compared to an average of only 4-7 over the past 5 years
Common Checkered Skipper and Crossline Skipper: 75 and 103 respectively — were prominent this year with the highest numbers recorded for our count for these species.

One species we were on the lookout for was the Monarch Butterfly.  This past January and February, the Monarch sanctuaries in Mexico, where the butterflies overwinter, were hit by unusual storms.  Their population was already at the lowest number ever recorded, and then the storms killed at least 50% of that already small number.  As spring started, there was good rainfall in Texas and the milkweed bloomed on schedule, but the question remained if that would be enough to give lift to the population.  As Monarch generations proceeded northward, butterfly watchers across Virginia sent emails through listserves asking if anyone was seeing Monarchs, but the response was no.  We were very worried and kept our eyes peeled for them.  Across our teams, we spotted 82. This number is half as many Monarchs as we had last year, which is consistent with the population drop, but it is not our lowest count. The robust milkweed from the early spring and summer played its role in helping the population climb back up, and that is great news!

View the data from the 2010 count here. See the data for all our butterfly counts here