Everyone who lived in Loudoun County in the spring of 2004 remembers them. Their incessant, deafening buzz, big red eyes, and rare appearance garnered the periodical (“17-year”) cicadas much attention in the media, in science classrooms, even at the office; they were, literally, everywhere.

Some people even threw parties in their honor (remember the recipes?). We won’t see these red-eyed oddities again in Loudoun County until the spring of 2021, when, I am certain, they will be met with as much interest, whether revered or revolted. 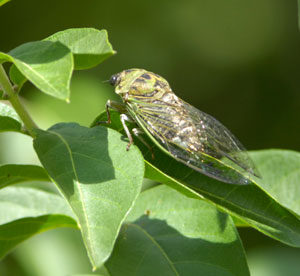 A “dog-day” cicada at Bles Park

Less attention is given to the yearly appearance of their relatives, the “dog-day” (or annual) cicadas (Tibecaen canicularis).  They are called dog-day cicadas because they emerge from the ground seeking mates in the hottest part, or “dog days,” of August. Adult cicadas are large, winged insects, 25–50 mm in length. They are green, white, and black with large eyes set far apart on their heads. They have transparent wings held roof-like over the abdomen. While their physical appearance can be striking, cicadas are noticed more for the sound the males create to attract females. They make this sound using special membranes on the sides of the abdomen called tymbals.  They usually make the most noise in the warmest part of the day.

While sometimes called “annual” cicadas, these insects actually have a life cycle of three years or more. The adult female will lay a cluster of eggs in a slit that she makes in the end of a tree branch with her ovipositor. In about 6 weeks small nymphs will hatch and fall to the ground. They burrow into the soil under the tree in search of its roots. The roots of the tree will provide the nymph’s food (sap) as it grows and molts several times over a period of years. It continues to burrow deeper as it gets bigger, until it is several feet under the ground. When fully formed these nymphs will come out of the ground at night and climb up the trunk of a tree. The adult will emerge from the nymph case through a crack in the back of its shell, leaving behind the hard brown shell that we often find attached to tree trunks and fence posts.

Cicadas in the nymph stage feed on the sap of trees through the roots and adults may suck on twigs, but these insects are not considered agricultural pests. In fact, they are an important food source for birds and other wildlife in Loudoun County.

So this summer, when the heat is getting you down, grab something cool to drink and sit outside to enjoy the annual song of the dog-day cicada — nature’s signal that summer, while it can seem endless, will soon be over.

Test your knowledge of Cicadas–try our Cicadas Crossword Puzzle.