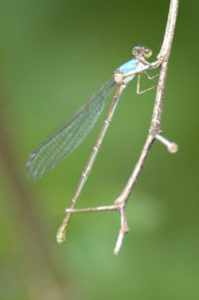 The damselfly is a close relative to the dragonfly. Both belong to the ancient order Odonata. Damselflies belong to the suborder zygoptera, and dragonflies are in the suborder anisoptera. Odonata means “toothed” referring to their chewing mandibles.

Depending on the species, damselflies inhabit the terrestrial and aquatic environments provided by cool streams, rivers, ponds or marshes.

Contributing to the delicate balance of nature, damselflies are beneficial in keeping down annoying populations of flies and mosquitoes. Yet unlike their prey, they are harmless to humans.  And their presence is usually an indicator of a healthy ecosystem.  Damselflies require clean water in which they lay their eggs and without it, they are unable to breed. 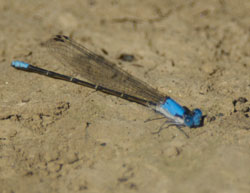 Damselflies hatch from eggs and begin their lives underwater as nymphs. They spend most of their lives in this larval stage, breathing through three tail-like gills. They are ferocious aquatic predators, feeding on other larva, tadpoles and small minnows. How long they live underwater depends on available light and food and water temperature, so their underwater stage can last anywhere from a few months to a few years.

While living the aquatic life, damselflies molt several times. On the final molt, they slowly emerge from the water, finding a long stem or rock to settle on, and begin the final transformation. The nymph cracks open leaving the old skin and gills behind and the adult damselfly emerges. After the damselfly dries out—extending its long, slender wings and abdomen as it sunbathes—it immediately begins to fly and search for food and a mate. Mating takes place while perched, taking from five to ten minutes.

Often seen gliding over the water’s surface, their bodies are usually brightly colored with green, blue, red, yellow, black or brown. They have short antennae, but their wings are large. They have two elongated pairs of wings, the same size, with a strong cross vein and many smaller crisscross veins, making them very strong and flexible.

Each wing has a notch in the front edge. Damselflies are amazing fliers with very strong muscles. Their stupendous feats of aerial acrobatics include darting sideways, backwards, changing direction in mid-flight, hovering and stopping instantly.

Equipped with huge, protruding compound eyes, they can see up to 28,000 facets at one time. They put all of these tiny images together, enabling them to spot prey, such as a mosquito or a gnat, up to 40 yards away.

Hunting can take place for hours at a time. Damselflies have six hairy legs located near their heads, but they are seldom used for walking. Instead, they are folded into a kind of net while flying, and their insect meals are then scooped into the mouth. A prehensile labium, a lip-like structure, can be extended from underneath their head making their bite immediately fatal to their prey. They do not bite or sting humans.

It is a relatively short life for adult damselflies. Some live a few weeks, while others live for a few months. But damselflies are among the oldest living creatures on the planet. Fossilized specimens show them to be more than 300 million years old and to have once had wingspans of nearly 30 inches across.