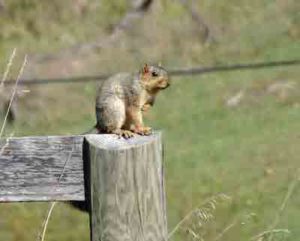 Most of us are familiar with the Gray Squirrel that visits our bird feeders and buries nuts in our gardens and lawns. The Gray Squirrel is overall gray with salt-and-pepper coloring and weighs up to about a pound.  Its cousin, the Fox Squirrel, is the largest of the North American tree squirrels.

Historically, Fox Squirrels appeared across the Mid-Atlantic area, but now they are found primarily in the sandhills and coastal plains of South Carolina and North Carolina and the mountains of Virginia.  We have them here in Loudoun County and when seen near a Gray Squirrel there is no mistaking the two.

Where the Gray Squirrel may reach lengths of 16-21”, the Fox Squirrel is 20-26” long (including the tail) and weighs 1.5 to 2.5 pounds.  Fox Squirrels in the Piedmont and mountains of Virginia have strong yellow-brown coloring dorsally and have a rusty coloring on their ears, feet and underside of their tails.

Along the coast of Maryland and Virginia, there is a subspecies of Fox Squirrel called the Delmarva Fox Squirrel.  This species, while once widespread, now only exists in small numbers and is listed as endangered.  Active management programs are now in place to assist in its recovery.  While not endangered in Loudoun, the decline of Fox Squirrel numbers in general appears to be due to loss of habitat since these animals are so closely tied to mature forests.

Primary Sources:
Mammals of the Carolinas, Virginia, and Maryland by Wm. David Webster, et. al.;
Living with Wildlife by The California Center for Wildlife