Plant Life In the Cold

For plants and animals, preparing for winter is all about escape or making yourself scarce by retreating to shelter and putting on an overcoat. Birds can fly away to shelter or warmer climes, mammals can grow a thick coat of fur and retreat to nests and burrows, perhaps to hibernate, and reptiles and amphibians can den or dig themselves into the litter or mud to hibernate. 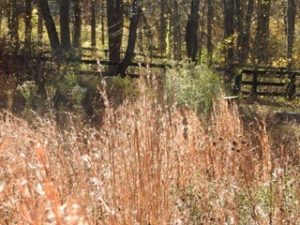 Plants just have to sit there and take whatever winter throws at them, so they have their own ways of making themselves scarce and surviving the cold season. Annuals wrap up their whole life cycle in one season and then die, but their genes live on, prepackaged in their seeds. These little packets of immortality, lacking tender fleshiness, can survive the harsh conditions of winter and live to sprout a new plant in spring or perhaps many springs later.

The seeds of some plants, especially weedy species, can remain viable for 50 years or more, waiting in the soil for the right conditions to germinate. Seventeen-hundred-year-old seeds of lamb’s-quarters (Chenopodium album) dug up from Iron Age deposits in northern Europe have germinated.

Numerous plants in our meadows, waysides, and wetlands are biennials or herbaceous perennials. In addition to producing seeds, they can overwinter underground and rise again to flower and fruit year after year for two to many years. Biennials (i.e., evening primrose, Oenothera biennis) are a special case. The first year they germinate and produce a basal rosette of leaves that hugs the ground for warmth and remains green through the winter. The second year they send up the stalk that produces the flowers and fruits with seeds, and then the whole plant dies.

Trees and shrubs are woody seed plants, which can withstand often harsh conditions even with exposed limbs spread high above the ground. A woody plant may live for many years, surviving dozens or even hundreds of winters. How do they do it? They have their own strategies for making themselves scarce and taking a break from active growth during the cold season in a state of dormancy, a kind of winter snooze induced by autumn’s shortening and cooling days. They awaken in spring to the snooze alarm of warming and lengthening days.

To shed or to fortify your leaves, your most vulnerable tissues ― that is the question. Woody plants have adopted one of two basic strategies, either the evergreen habit or the deciduous habit. Some evergreens such as mountain-laurel (Kalmia latifolia) and American holly (Ilex opaca) have broad, leathery leaves, which can be further protected by dense hairs underneath, as in rhododendrons.

More likely to come to mind, however, are the narrow-leaved conifers such as pines, spruces, and hemlocks, which reduce their exposure to the elements by having scale- or needle-like leaves. Evergreen leaves may also be fortified by thick, insulating outer cells and antifreezes such as the abundant resin in coniferous leaves. 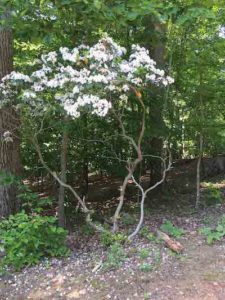 The deciduous habit dominates the forests of the Appalachian region, including our area. Deciduous woody plants shut down their leaf factories in the fall, break down the photosynthetic machinery, and reveal their beautiful, true colors, which often are species-specific, before releasing the leaves to recycle their elements for another year and future generations. All remaining product of the summer is first transported to the roots or stored in the woody tissues for safe-keeping for next year.

Finally, their tender twigs of the year cease growing, harden, and terminate their tender growing points with buds covered by tough, insulating outer scales. In both evergreen and deciduous woody plants, woody tissues and bark protect the living cells in trunk and limb. As part of the autumn shutdown, these cells flush out the freezable liquid into the intercellular spaces and concentrate the solutes in the cells, so that the protoplasm itself will not freeze.

Dormancy is a season of restless sleeping because growth never really ceases altogether. Buds slowly swell until they burst in spring, and the earlier the warmth the faster the swelling. Evergreens can carry on limited photosynthesis on the milder, sunnier days.

Winter can be an exhilarating time in nature, and neither cold nor snow should keep you from field and forest. Read the clues and look for what may not be so obvious amid the dense, bustling greenery of summer. Crunch the crust and tramp the fields, meadows, and waysides to look for the skeletons of summer’s weeds and wildflowers, survey the range of fruits and seeds that skip across the icy surface or hitchhike a ride to other habitats of opportunity, or pick a lonely, mellowed persimmon waiting for a predator.

Flowers produce fruits, which may be dry or fleshy, such as berries, and fruits contain seeds, at least one. Fruits fascinate but also are telltales of their species. Look in sheltered places for rosettes or other gems of winter green. Listen o’er the wind for the faint tinkling of tree sparrows or the rat-a-tat-tat of a downy woodpecker working on a goldenrod gall–now you hear it, now you don’t.

Winter strips the forest of its summer pretenses and, like an x-ray, lays it bare to the skeleton. Now everything is unmasked ― the evergreens, great and small; the storeys of the forest, from the canopy to the bushes and the lowly ferns and mosses; the silhouettes of boles and branches and thus the shapes of species; the landscape architecture and hue of bark; the twigs with their vibrant buds and other unique identifiers; the snags that have passed from life to death into the hands of the decomposers but in so doing are giving life to other great casts of characters, the bacteria, fungi, and insects, and apartments for birds and mammals.

Skulking through the swamps and bottomlands may turn up lingering, stringy yellow flowers on the zigzag twigs of witch-hazel (Hamamelis virginiana); the speckled twigs of spicebush (Lindera benzoin) with the scarlet berries of last year or the swelling flower buds of the new year; the deep red berries of the deciduous holly known as winterberry (Ilex verticillata); or the spears of a marching army of skunk-cabbage (Symplocarpus foetidus) flowers pretending that winter is nothing at all. Thoreau called these “cabbages” “hermits of the bog.”

The snowy winter woods is a magical, enchanting place, never to be despised. There you can find solitude and silence. There you can learn simple lessons from complex systems. There you can enjoy moments of ecstasy under monarch trees or when a ruffed grouse explodes from the snow under your feet. There you can ponder the wonder and awe of nature.