By Darrell Schwalm and Hale Chopp

Recently I volunteered to represent the Loudoun Wildlife Conservancy in helping with the Batztravaganza program at the Audubon Naturalist Society (ANS) Rust Nature Sanctuary.  I offered to make the bat houses because I have a neighbor, Hale, who is an experienced woodworker.  Hale recently bought some power tools that were just what was needed to cut out the materials and make the bat houses.  Both of us have watched bats flying in our backyards and have wondered at these mysterious creatures. However, neither of us had experience making bat houses, so I went online to Bat Conservation International (BCI) (http://www.batcon.org/resources/getting-involved/bat-houses) and found “The Bat House Builders Handbook.” 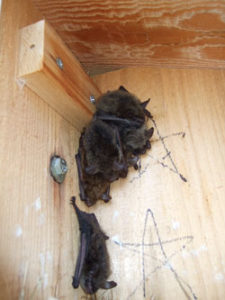 I learned that due to decades of unwarranted human fear and persecution, bats are in alarming decline. BCI encourages conservation-mined citizens to put up a bat house to help bats find a home, with the resulting added benefit that people will have fewer yard and garden pests.  BCI advises that bats are the primary predators of night-flying insects, and that “as consumers of vast numbers of pests, they rank among humanity’s most valuable allies. A single little brown bat can catch hundreds of mosquitoes-sized insects an hour.”

I had seen bat houses for sale which looked like birdhouses — short, stout houses open at the bottom with several slats on the inside.  That’s what I thought I would be making.  However, I learned from BCI that these bird-house-like boxes only have an occupancy rate of about 10%, mostly bachelor bats.  On the other hand, taller, longer and wider houses with two or three partitions on the inside attract pregnant females that form nursery colonies.  These houses have about an 80% occupancy rate.  With this information in hand, choosing the design became a “no-brainer.”  I also found another excellent reference ― a Penn State publication titled, “A Homeowner’s Guide to Northeastern Bats and Bat Problems”, 1996 (CAT081).

Both publications agreed upon some important guidelines that need to be followed by homeowners if they are to successfully attract a colony of bats:

The designs provided in both publications were very good, although Hale and I made an important modification to make construction easier.  We put grooves into the side panels rather than use spacers to hold the inside partitions.  This made attaching the front panels, the back and the roof much easier.  The hardest part was calculating the size of the inside partitions to allow space between the top and the roof and a staggered access design at the bottom.  Hale and I made a dozen bat houses, each of which will hold a couple of hundred bats.  Making housing for 2,400 bats is a good day’s work any way you figure it.