A Wildlife Oasis in the East

It could have been a high-density residential development or a shopping mall.  It is surrounded by what it could have been.  But, thanks to the vision and initiative of a handful of Loudoun citizens, Claude Moore Park today is an oasis of wildlife habitat in the rapidly urbanizing, eastern part of the county.

Claude Moore is not just habitat.  As with many of Loudoun’s parks, it offers multiple uses to citizens with multiple interests.  The park hosts a large sportsplex that attracted thousands of visitors last year.  The park preserves remnants of the colonial village of Lanesville and a pristine section of historic Vestal’s Gap Road, the main route from Alexandria to the West for Native Americans and early American settlers.  Also, the Loudoun Heritage Farm Museum located at the Park is dedicated to preserving the memory of the rich agricultural county that Loudoun used to be.

A Rich Blend of Habitats

Most of Claude Moore’s 357 acres are a rich blend of natural habitats.  About a third of the park’s natural area is today a climax oak-hickory forest typical of the Virginia Piedmont.  Another third is successional forest, in transition from farmland to mature hardwoods.  The remaining third is wetland surrounding two ponds, three streams, and signs of beaver activity.  First-time visitors to the park, some who say they have driven by the entrance hundreds of times, are surprised at the expanse of natural area and the solitude they can find next door to the hum of suburbia. 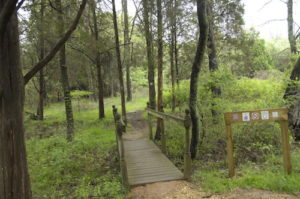 Claude Moore is the largest natural area accessible to the public in the eastern part of the County.  Eleven miles of trails provide hikers, birders, and other outdoor enthusiasts access to the rich diversity of habitat.  Two interpretive trails provide visitors insight into ongoing forest succession in the park and into native trees typical of the Virginia Piedmont.

Significant natural features include a section of forest that state biologists have cited as an intact example of a mature southern hardwood forest undisturbed by logging or other human activities.  The park also hosts two stands of Prickly Ash, a threatened species of tree in Virginia and a source of food for the endangered Giant Swallowtail butterfly.   Mature forests in the park include oak trees that date from the colonial era.

A Passion for Education

Claude Moore’s staff, with help from part-time instructors and volunteers, offer a variety of nature-oriented classes, programs, and camps for children as well as adults.  Over 10,000 school children participated in the park’s environmental education programs last year.  Park staff and volunteers lead regular bird, insect, and other nature walks during the year, and the Frogshackle Cabin Nature Center provides a hands-on nature experience for visitors.

How the Farm Became a Park 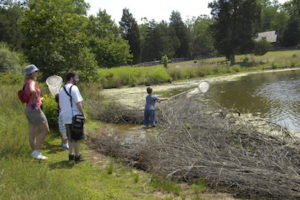 Claude Moore is a haven for wildlife today only because individual citizens showed the initiative and dedication necessary to divert it from the path of high density development.  Dr. Claude Moore, who bought the farm in 1941, donated it to the National Wildlife Federation in 1975.  The farm appeared destined for development by 1986, following its sale by the Federation to developers and Dr. Moore’s unsuccessful efforts to sue to prevent the sale.

A grass-roots, citizens’ movement by the farm’s neighbors in the Sterling area was critical in generating support in the county for rescuing the farm from development and purchasing it for parkland.  A successful bond referendum in 1987 provided the funds necessary to complete the purchase.  Citizen support for natural habitat was also an important factor in limiting the area of the park devoted to ball fields and other more intensive uses when the park opened on a full-time basis in 1995.

The Future of the Park

A new resource management plan provides that most of the park will remain as natural habitat for passive recreation.  While the successional forest will be allowed to mature, the meadows will be maintained and stream and pond buffers will be restored.

Just as in the past, the vigilance and hard work of individual citizens will be important to the future of Claude Moore’s natural habitat.  The rapid growth around the park could lead to new pressures to expand other, more intensive uses.  Also, individual volunteers willing to donate their time will be a decisive force in maintaining the park.

Park volunteers put in almost 2,000 hours working on projects in 2002.  Volunteers help maintain the trail system, lead many of the nature programs, and have been important in restoring the park’s historic buildings.  Currently, park staff are looking for volunteers to help with mapping and inventorying the property’s trees, plants, and wildlife and assisting with many other projects.  Those who are enthusiastic about wildlife and natural habitat will find Claude Moore a great place to put their passions to work.

Claude Moore Park is managed by Loudoun County’s Department of Parks, Recreation, and Community Services.  It is open from dawn to dusk daily, except for Thanksgiving and Christmas.  The visitor center is open from 9am to 5pm.   The entrance to the natural areas of the park is located on the east side of Cascades Parkway, one-half mile south of Route 7, in Sterling.  The visitor center phone number is (703) 444-1275, or you can click here for their website.