Bulldozers roll across fields for a new 700-unit housing development.

A new school obliterates forests and wetlands. A homeowner decides to double the application of “weed and feed” to her lawn and spreads it right to the street curb just before a spring cloudburst.

Every hour of every day, Loudoun’s creeks and streams pay the price of the county’s unprecedented population and building boom. The county’s population is among the fastest-growing in the nation; number one in a recent survey, with the population nearly doubling in just ten years. 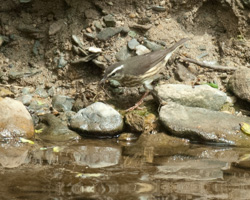 Loudoun County 250 years ago was a vast wilderness with brook trout in every crystalline stream tumbling down from the Blue Ridge. Settlers transformed the landscape with axe and plow into a rich agricultural province that persevered for the next 210 years until about 1960, when the edge cities and suburbs of Washington, D.C., began spilling into it. Today, not a single creek supports trout, not even with artificial stocking.

Nationwide, agriculture is cited as the leading pollution source to streams (Water Quality Report to Congress, 1998). It would be easy to blame Loudoun’s farms for some of our degraded streams, and they are no doubt part of the problem. But our agricultural agencies, along with enlightened farmers, have implemented effective conservation techniques to minimize the amount of silt and chemicals reaching our creeks. However, even as our farms are improving their practices, their numbers and acreage are giving way to a new landscape where conservation is virtually impossible – a landscape of residential, commercial, recreational, industrial, and transportation infrastructures.

Over 18 acres of the county’s natural landscape disappear each day under buildings, roads, and manicured lawns (Loudoun Environmental Indicators Project). Rooftops, driveways, roads, parking lots, etc. are potentially the most damaging to watersheds (see related article on page 15). A typical residential subdivision in eastern Loudoun has 25% to 28 % impervious surface. Studies have demonstrated that as little as 10% can have a negative effect on water quality and 25% produces possibly irreversible degradation, not just locally but also far downstream and over the entire watershed.

The cumulative effects of development were recently brought home to our volunteer stream monitors. Volunteers sampled the South Fork of Catoctin Creek at the Nature Park in Purcellville (monitoring site #4) from 1996 to 1998, with samples indicating a healthy population of benthic macro-invertebrates, a key indicator of aquatic health.

This stream segment was our showcase site for training workshops and public events. Through late 1998, we were still getting the requisite 100 specimens, though with extra effort. Meanwhile, industrial operations and new subdivisions expanded upstream and adjacent to the site. Suddenly, the bottom fell out.

Over the course of just four sampling events, benthic macro-invertebrate counts declined from 100+ specimens to just 10 specimens. We alerted the Virginia Department of Environmental Quality and their Northern Virginia Regional Office has launched an investigation.

What does the future hold for Loudoun’s streams? At least two other sites sampled by the Loudoun Stream Quality Project have marginal water quality. One build-out could push these streams into an unhealthy condition. Due to limited resources, neither volunteers nor government agencies monitor many streams. Their current condition is unknown. For several streams, it is likely too late. One source of hope is found in the County’s recently approved revisions to the Comprehensive Plan.

By reducing the number of residential units and roads, the revised Comprehensive Plan would help maintain stream quality by reducing impervious surfaces, but because so much building is already approved and in the pipeline, it will take six to eight years before any slowdown is noticed. Another element of the plan, the “Green Infrastructure,” is intended to preserve natural features.

Chief among them is a proposed Rivers and Streams Corridor Overlay District (RSCOD). The RSCOD proposal keeps development out of flood plains, wetlands and riparian areas and provides a buffer zone around streams. In combination with effective erosion, sedimentation, and storm-water management, the RSCOD will help maintain stream health.

If Loudoun’s streams are to survive the building boom, it will take wise land-use planning, logical regulations, government enforcement, innovative technology, and the daily involvement of concerned citizens who will stand for nothing less than a legacy of clean streams for the next generation.