Is It Time, Once Again, To Drain the Swamps?

With the approach of warm weather comes the return of those pesky little insects that buzz about your head and in the case of the mosquito, also contribute a stinging, itchy bite.  This spring will probably bring with it a renewed concern over the threat of West Nile Virus (WNV).  The common household mosquito, Culex pipiens, has been the primary focus of emergence and spread of WNV in the United States.

“Mosquito” is a Spanish or Portuguese word meaning “little fly”.  The life cycle of the mosquito begins with an egg.  Eggs are laid one at a time, and in the case of the Culex, laid in rafts of 200 or more that float on the surface of water.  Within 48 hours, most eggs hatch into larvae equipped with siphon tubes that hang from the water surface.  Larvae molt four times before entering the pupal stage, a resting, non-feeding stage in which the pupa takes about two days to turn into a fully formed adult. Now the mosquito introduces itself to humans, as the adult female requires a blood meal to develop fertile eggs.   Culex usually live for only a few weeks during the warmer months.  Females that emerge late in the summer search for sheltered areas where they hibernate until spring.  Warm weather brings them out again in search of water on which to lay their eggs.

Standing water is essential to the mosquito’s life cycle.  Last summer brought concerns over wetlands that had been preserved within various residential communities in the county.  Some citizens believe these mosquito breeding grounds should be drained to reduce the risk of WNV. Let’s examine the facts. 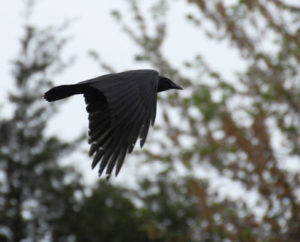 WNV is deadly to birds, especially crows, and has a far greater impact on birds than humans in North America, with 60 bird species — including merlins, great horned owls, catbirds, warblers, gulls, swans and at least one bald eagle — testing positive to date.  The chance of humans becoming seriously ill from WNV is very small. Most humans overcome any infection from WNV by the normal response of the immune system.  According to the Centers for Disease Control and Prevention: “Even in areas where mosquitoes do carry the virus, very few mosquitoes—much less than one percent — are infected. If the mosquito is infected, less than one percent of people who get bitten and become infected will get severely ill. The chances you will become severely ill from any one mosquito bite are extremely small.”

Wetlands are part of the natural history of Loudoun County, especially east of Leesburg, where poorly drained soils and a high water table in what was once a large sea result in an abundance of natural wetlands and standing water. Those who do not understand the benefits of wetlands view them as merely unkempt areas that should be filled and manicured into parks or lawns.  Wetlands provide enormous benefits, including storing floodwaters, removing sediment and pollutants from storm-water runoff, and recharging the groundwater.  Wetlands have been likened to the “kidneys” of a watershed, acting like a sponge to retain and break down pollutants through biological activity, plant uptake, and soil infiltration.

What’s more, wetlands and the transitional habitat along wetland margins are one of nature’s most prolific ecosystems, supporting remarkable biological diversity.  While wetlands can provide breeding habitat for mosquitoes, they also support mosquito controls. Mosquitoes form a major part of the diets of fish, birds, bats and other wildlife.  Fish are useful predators of mosquito larvae, while predacious insects like the dragonfly help control adult mosquitoes.  Natural controls should always be preferred.

Some simple measures you can take to protect yourself and others from WNV without compromising the environment:

Educate others on the importance of maintaining habitat for mosquito predators like fish, birds and insects.  Help others to understand the benefits of wetland areas rather than seeing them as a potential threat.

Discourage the use of pesticides designed to control adult mosquitoes. Pesticides should be a last resort, when all other controls have been exhausted.  According to the American Bird Conservancy, spraying pesticides in urban and suburban areas does little to reduce the spread of WNV and may breed resistant strains, reducing their effectiveness when they may be the only option. Pesticides have direct, toxic effects on wildlife and beneficial insects, such as butterflies, bees and dragonflies, and on most aquatic life.

If you find a dead bird, avoid handling it, or use gloves or a plastic bag to protect your hand.

Make sure doors, windows and screens are tight. Wear long-sleeved shirts and long pants when outdoors at dawn or dusk and use repellents to protect bare skin.

Avoid insect electrocutors; these devices are ineffective against mosquitoes but do effectively kill beneficial insects.