The Impact of Pets on Wildlife

Cats are the most popular pets in the United States and now number approximately 66 million. Many of those cats are allowed to roam unsupervised. It is estimated that 40 million pet cats are outside part or all of the time. Combine that figure with an estimated 60 million stray and feral cats and the numbers become staggering. 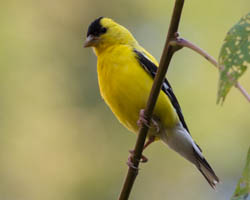 A research study done in Great Britain calculated that the island’s 5 million house cats were responsible for the death of approximately 70 million animals and birds annually (Journal of Zoology 212:439-455, 1987). That is a death toll of 14 creatures per cat per year. Extrapolate those numbers to the estimated 100 million free-roaming cats in the United States and even the most relaxed pet owner should see cause for concern. Other research studies indicate that wildlife and bird deaths caused by cats may be even greater! (NWRA Quarterly 12(3): 14-15, 1994)

There is no doubt that there are other contributing causes to the decline of bird populations throughout the United States such as habitat destruction and the use of pesticides. However, the aggressive predation that is characteristic of even the most docile and well fed of cats is a definite cause as well. Cats are non-native predators and their impact on native wildlife and birds is just now being acknowledged.

Cat predation is the number one cause of admission into many wildlife centers. In many areas, cats cause more injuries than cars, pesticides, oil spills and all other causes.  Victims of cat attacks stand little chance of recovery even with proper care because of the massive internal injuries that occur and because of the life threatening bacterial infections that take hold secondary to bite wounds.

Interestingly enough, little work has been done on the effect of dogs on native wildlife and bird populations. Anecdotally, there are owner’s accounts of retrievers bringing baby animals home, veterinarian’s stories of treating dogs returning from roaming with blood on their coats, farmer’s tales of dogs chasing livestock and wildlife and state biologist’s reports of slaughter in winter deer yards caused by dogs.

A number of field studies have been done on the effect of predation on ground nesting birds.  When predators were reduced in the study area by 50%, gamebird populations increased 100% or more the subsequent year. The increase in bird numbers was attributed to decreased predation of nesting birds and eggs. It can easily be inferred that adding free-roaming cats and dogs to an area would cause a substantial decline in the numbers of resident birds and wildlife.

Predation by pets is becoming both a local and national concern. Organizations such as the American Bird Conservancy have initiated

“Cat Indoors!” a campaign for safer birds and cats. Many local jurisdictions have established leash laws to help decrease the incidence of free roaming dogs. For example, Loudoun County has a leash law that requires dogs to be on leash whenever they are off of their owner’s property. Some localities such as Alexandria, VA, have even initiated leash laws for cats.

There are many practical reasons to contain roaming pets above and beyond the protection of wildlife and birds. Those reasons include both public and pet health concerns such as the containment of rabies, prevention of dog bite injuries and the extension of your pet’s life. Dogs and cats that are allowed to roam are more likely to be hit by cars, attacked by bigger animals
and contract fatal diseases (Feline Leukemia, Feline Immunodeficiency virus, Rabies, Parvo virus, etc.).

Pet owners need to be aware of the damage that their pets can cause and accept responsibility for keeping their animals under direct supervision. Local birds, wildlife, livestock owners and your pet, will thank you!