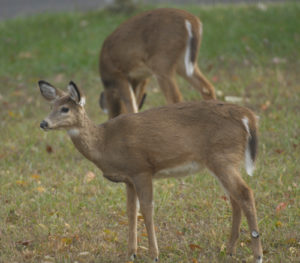 Avoiding animal & car encounters and what to do if one happens

By scanning the sides of roads and not driving too fast, we have the reaction time to avoid hitting animals. Most are not moving that quickly and we have the choice and the control over our vehicles to slow down and even stop to let them pass. We try to save wildlife habitat. We try to feed and protect the wild creatures sharing our space. But every time we drive down the road, we see their bodies by the roads. Sometimes, try as we might, we’re responsible ourselves for the fox or the deer dead by the highway.

What can we do, except slow down?

Don’t provide a tempting site by throwing litter such as apple cores from cars.

Take note of the times that present high risk. About half of the car/deer encounters occur between October and January, when the deer are evading hunters, mating, and establishing feeding grounds.

Be alert when you see woods on one side of the road and a food, shelter, or water source on the other side.

Roads are battlefields for animals (as well as for some drivers) and account for more animal deaths and mutilations than any other single agent. Squashed animal corpses are so common on our roads that they are almost as accepted as white lines and street signs. Most of them are squirrels and rabbits, though sometimes the coat color betrays a fox or raccoon, or perhaps a cat or a dog. To understand why, we need to understand wildlife behavior.

Wild animals move about to find food, water, and shelter by following the contours of the ground. They share established trails with each other and adapt to many different terrain and conditions. People, on the other hand, like to go straight from one point to another in the shortest distance possible. When animals cross highways, they are not prepared to encounter our scent-free, fast moving automobiles.

Slow-moving animals like toads, turtles, and snakes stand little chance against what is overhead traffic, but it is surprising how often these animals become the walking wounded rather than flattened corpses. Darting squirrels, never quite sure of which way to go, are more often killed outright. Mammals like groundhogs, foxes, raccoons, skunks, and rabbits are common casualties, frequently hurt rather than killed, and they often drag themselves off the road to lie up in their den, either to die slowly or to recover in due course. Deer make their impact felt, but drivers either leave them where they lie injured or stop and don’t know how to help. Birds suffer considerable losses on the roads, especially in spring when caterpillars that have fallen from overhanging trees lie invitingly exposed on the tarmac.

What can you do to help prevent road kills?

When driving on highways, pay close attention to road signs advising of wildlife crossing zones. Slow down in those areas, especially in the early morning and early evening hours, and stay alert. If you spot an animal (usually by the light reflecting in its eyes), slow down further and be prepared to stop and yield the animal the right-of-way. Often automobile headlights blind a wild animal, and it may become disoriented. Give it time to recover its vision and move on.

What can you do after the fact?

If you come across or are the cause of a car victim, don’t create a worse accident by jamming on your brakes or swerving, both natural instincts. Use your hazard warning lights when you do stop. Remember that the animal is frightened as well as injured and therefore unnaturally aggressive, and will probably need treatment for shock. Park your vehicle between the animal and oncoming traffic if you can, and at night direct your headlights so that you can see and be seen. Never run to the animal’s aid. For the sake of the animal and any bystanders, your whole attitude must be calm and reassuring.

If the animal is trapped under a vehicle or its wheels, do not try to move the vehicle but jack it up carefully to release the animal, which might want to remain hiding underneath for security or from shock even if it is not badly injured.

Sometimes you will come across an animal at night which has simply been dazed by headlights and only needs a chance to recover its night vision in the darkness. In the case of an owl, this could take up to a half an hour in a safe place. If you are driving at night, do watch for nocturnal animals and if possible give them a chance to cross safely out of the way by stopping and turning off your headlights (leave your parking lights on so that you can be seen).

As with all rescue situations, if you feel unable to deal with it yourself, you should contact someone who can. If a deer is injured in the road it usually needs more than one person to lift it and move it out of harm’s way or into a vehicle, but it also needs handling by someone who understands deer. If, as so often happens, your car has hit a deer at night on a country road, if possible get someone else to contact the police while you watch the animal. The police have plenty of experience with this type of situation and will be able to provide the appropriate assistance.

Most important of all: slow down and pay attention.