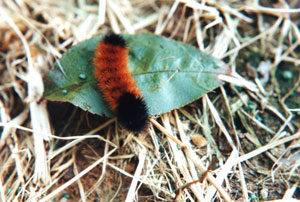 Some people swear by the Old Farmer’s Almanac. Some swear by the woolly bear, and peer carefully at him marching across the roads in the fall, to check the width of that brown band in his middle.

Woolly bears are called “woolly worms” to our south, and in some places “hedgehog caterpillars,” because they curl up into a bristly ball when disturbed. They have 13 sections, all covered with thick tufts of hair.

Why do they cross the road? They’re looking for a place to spend the winter, under leaf litter or a flap of tree bark. In the spring they come out and go back to eating grass, clover, plantain, dandelions and cabbage. Then they make a cocoon from their own fur held together with silk, and two weeks later step forth as handsome Isabella tiger moths (Pyrrharctia isabella), with boldly striped wings. Female moths lay their eggs in clusters on herbaceous plants, the small caterpillars hatch in four or five days, and life goes on.

As we all learned, if the middle brown band is wide, the winter will be easy. If the road-marchers are mostly or all black, order some extra stove wood. Alas, it doesn’t work. The woolly bear doesn’t forecast, it just records. The variations of black and brown apparently reflect the weather it’s already known, not the weather to come.

Back to the Farmer’s Almanac…