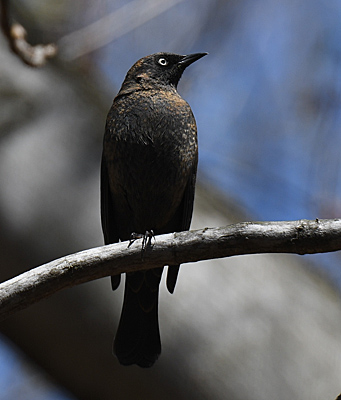 Novice and expert birders alike enjoyed the opportunity to go birding with Loudoun Wildlife on January 8 at the Dulles Greenway Wetlands – property that is not open to public.  Built in the early 1990s to replace the wetlands lost when the Dulles Greenway was built, this wetlands along the Goose Creek near Oatlands, is a great place to observe a wide variety of birds including a magnificent pair of Bald Eagles who have successfully nested there for over a decade.

Both groups of birders got to see Rosa and Martin, the Bald Eagles we view on the live-stream camera, along with several species of wetland birds.  The highlight of the walk was seeing six Rusty Blackbirds, which hold the “unfortunate distinction of being one of North America’s most rapidly declining migratory birds,”  according to  the Birds of Loudoun.  The book also notes that, “Populations have declined by an estimated 85-95% over the past 40 years.”

US Federal and State agencies, along with Canadian agencies are widely studying Rusty Blackbirds to determine the reason for the decline.  The leading hypotheses are degradation and loss of breeding grounds in Canada and winter habitats in the southeastern US and global climate change.  Declining numbers of these water-loving birds may also be due to mercury contamination.