Butterflies and Clearwing Moths Found at the Willowsford Wet Meadow

On July 23, 16 participants joined Loudoun Wildlife naturalists Anne Ellis and Michael Myers for a hot and humid butterfly walk at the Willowsford Conservancy and observed 15 butterfly species and two clearwing moth species. The group assembled at the wet meadow adjacent to the Farm Stand. The meadow has a plethora of native plants thriving including popular pollinator favorites Wild Bergamot (Monarda fistulosa) and Joe Pye Weed (Eutrochium fistulosum). Most of the species seen during the walk were found in this wet meadow. 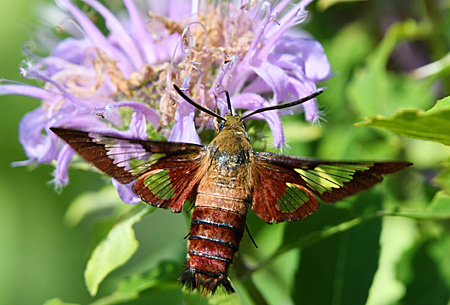 While it’s always great to see Monarchs and a nice variety of butterflies and skippers, some of the most exciting observations were two species of clearwing moths: Hummingbird Clearwing Moth and Snowberry Clearwing Moth. With only subtle differences between the two species, they can be hard to identify in the field, but while reviewing photos we confirmed that we saw both species. One of the subtle differences is the color of the forelegs – Hummingbird’s are black and Snowberry’s are white. We also saw a few different species of dragonflies and damselflies including both male and female Eastern Amberwings.

After visiting the wet meadow, we continued along a portion of Broad Run before crossing a bridge and walking along a shaded boundary road of Willowsford Conservancy’s farm. The brief moments of shade were a welcome respite on a hot morning, and we got good looks at resting Summer Azure butterflies, noting the differences between them and Eastern-tailed Blues.

The trail looped around a portion of the farm, and we ended the walk at the Willowsford Conservancy’s Farm Stand and native plant demonstration garden. While a few members of our walk peeled off early due to the intense weather conditions, many people were able to brave the conditions and stay hydrated for the entire walk. Although we always hope to see a greater diversity of species, it was an enjoyable time viewing butterflies among great native plant habitat. The Willowsford Conservancy is a good model for how HOAs can manage common land for the benefit of wildlife, and we always look forward to partnering with them on projects and events.

Loudoun Wildlife hosts an annual Butterfly Count on the first Saturday of August. Novices and experts are encouraged to volunteer to assist with this citizen science program. This year we are accepting sign ups until noon on Friday, August 5. 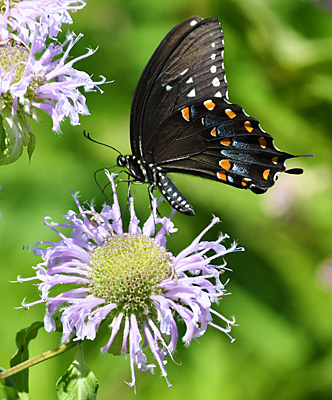